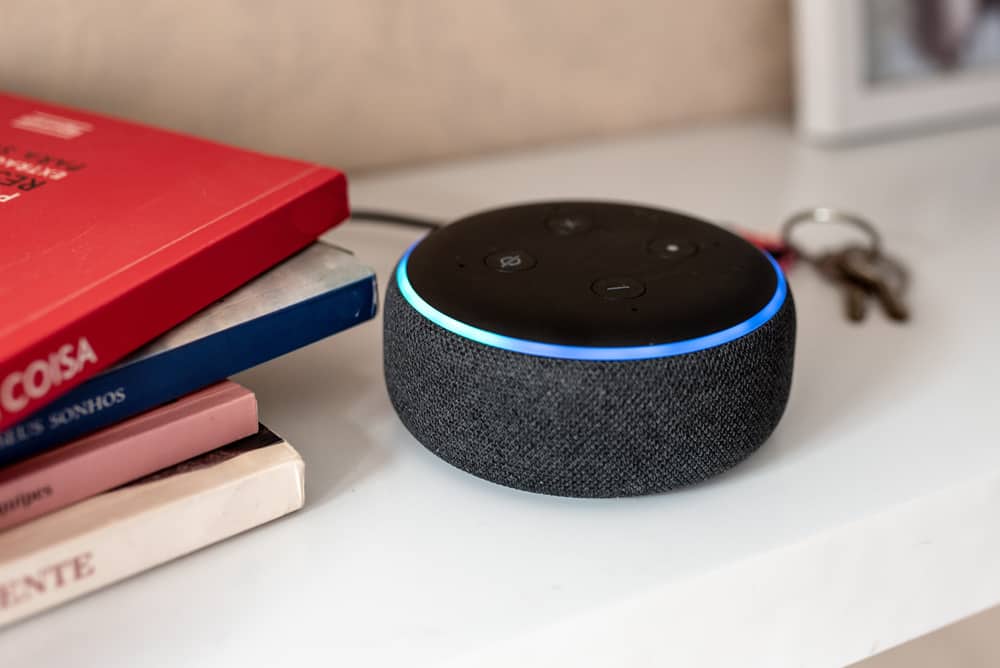 Alexa is a voice assistant, i.e., a platform that you can talk to or ask to do some tasks for you, which speaks using the Amazon Echo device – a wireless two-way Bluetooth speaker that activates when it hears its name.

These devices can also communicate with the help of the LED ring located on the top or bottom of Alexa. The LED lights can be white, green, purple, orange, blue, yellow, and red. Each color has a different meaning and can “behave” differently, so you’ll see the ring light up, pulsate, or spin, for example.

The combination of blue color and spinning is one that causes the most headaches for owners of Alexa devices, especially if they have just bought them. In this article, we will discuss what it means when Alexa blue light is spinning, the different ways and durations of the spinning, and how to fix them.

P.S. We will use the names Alexa and Amazon Echo interchangeably because most people call these devices Alexa anyway. 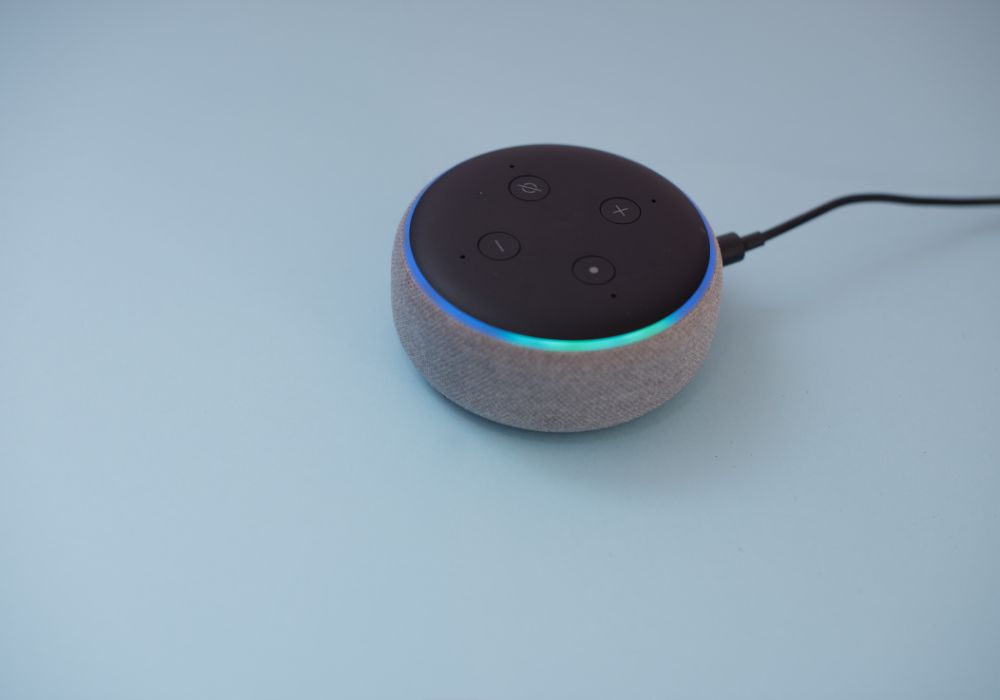 Let’s start with the simplest. If you encounter Alexa for the first time and notice a spinning blue light with a segment of cyan, you might wonder why it’s happening or if it should be happening at all.

There’s no need to worry because this only means that Alexa is starting up, and you will get used to it in no time. The same will happen after you reboot it.

Another thing that will happen to those who use the Amazon Alexa device for the first time is that after turning it on, they see that the blue light has changed to orange. It is because Alexa is not set up and is communicating this to you so you can set it up and tune it according to your needs for further use.

If you are not a very curious person or simply didn’t notice how Alexa works, you may be surprised to see a solid blue ring with a cyan segment after you say the trigger word. It just means that Alexa has heard it and is now waiting for your command.

After you say what you want Alexa to do, pulsating blue and cyan lights will appear on the ring, which is another of its normal functionalities and a sign that the device is processing your command.

4. Misinterpreting Of A Command

If you’ve been using Alexa for a long time, the situation described a moment ago must have happened to you. First, solid blue color with a little bit of cyan appears, after which the LED ring starts to glow in blue.

But you’re sure you didn’t say a word.

Most people’s minds go to one of these alleys. The first is that Alexa is malfunctioning, but that’s a bit boring. The second one is much more interesting, and that is that someone is listening to them. Could it be Amazon or someone from an intelligence agency, perhaps?

We can tell you right away that there is no need for such mental adventures and gymnastics. What happened is that Alexa heard a sound similar to your voice, interpreted it as a command, and simply did what it always does – it listened to its owner.

Situations like this can occur in houses where many people live or where the surroundings are quite loud. Whatever the reason, know that these devices are not perfect and, from time to time, they will “malfunction”. 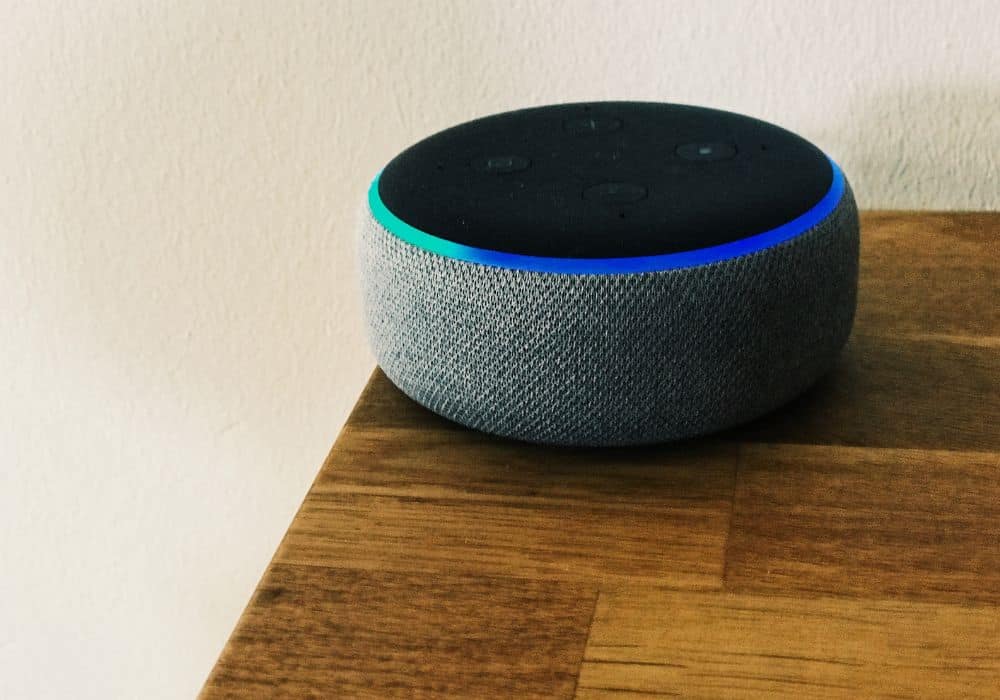 There are four triggers or wake words on Amazon Echo devices: “Alexa”, “Amazon”, “Echo”, and “Computer”.

However, not everyone is always willing to use one of these four names when they want to interact with the device. After all, we don’t even address our family members and friends by name whenever we talk or ask something from them.

If you are one of these people who doesn’t want to preface every command with a wake word, there is a mode just for you: Follow-up mode. When this mode is switched on, the solid blue light ring won’t appear like when Alexa first hears the wake word but will start pulsating straight away.

In case you forget the mode is on, you might be surprised to see a blue light immediately flashing after you start talking. But everything’s okay.

If by some chance you do not know how to turn it on and off, you will have to log in to the Alexa app and select “Devices”, where you will choose “Echo and Alexa”. After that, select your device, go to “Device Settings”, and after scrolling down, pick “Follow-Up Mode”. There you can toggle it on or off.

6. Do Not Disturb Mode

You spoke the command, but Alexa refused to obey you. You noticed the ring light up blue, followed by a quick purple flash. You repeat the command, and the same light show happens again, but there is still no execution. You’re probably wondering what’s wrong.

The answer is that you have turned on Do Not Disturb or DND mode. We don’t know if you did it by accident or turned it on and forgot, but the combination of blue light spin and purple light flash is a sign that it is turned on.

To turn it off, repeat the first four steps from the previous section (Alexa app → Devices → Echo and Alexa → Select your device). After this, select Do Not Disturb and turn it off.

All previous cases involved short periods of Alexa spinning blue light. What if it is constantly spinning? It is not yet time to panic because there are still several cases in which this is a regular occurrence.

One of those cases is a software update. Although you can do this manually, Amazon Echo devices are designed in such a way that they will update automatically.

When this happens, they won’t acknowledge your commands, which means you won’t be able to use them until the firmware updates are finished.

If you want to take advantage of even more services that the Amazon Echo device provides, you will have to pair it with your phone or some other smart device using Bluetooth connectivity.

But if you leave it in pairing mode, i.e., do not complete the pairing between the two devices, the blue ring will constantly spin. During this time, Alexa won’t respond to trigger word, which means you can’t use it.

The solution to this problem is simple – you need to complete the pairing. The steps are similar to toggling certain modes we talked about so far.

Open the Alexa app, go to the “Devices” menu, and select “Echo and Alexa”. After that, pick the device you want to pair and select “Bluetooth Devices”. Lastly, choose “Pair a New Device”.

In the last two cases, we had constant spinning of the blue light, which must have made some of you wonder how to distinguish between Pairing mode and Updating.

In order for Alexa to be able to receive an update, it must be connected to a Wi-Fi network. On the other hand, if you want to see if it is in pairing mode, check that in the Alexa app.

9. Something Is Really Wrong With Your Alexa

So far, we have told you about the most common culprits that can lead to Alexa blue light spinning and how to deal with each of them.

However, sometimes there really is a problem that causes the Echo dot blue ring of death, as it is popularly called. Some of them are software or wireless issues, logic board problems, faulty devices, lousy cable or adapters, and a low power supply.

Before you call customer support, you can try a few things. The old tried-and-tested turn-off-turn-on trick, for example. If that doesn’t help, you can try resetting or manually updating Alexa.

Next, you can try to check the internet connection and reset or turn off-turn on the wireless network and router.

Seeing the LED ring on Alexa light up or start spinning for no apparent reason might be scary when you don’t know why. But most of the time, it’s nothing; that is, Alexa is just behaving normally.

You’ll see it go blue because it’s starting up, preparing for setup, or processing a command. The last one can be a false alarm.

Other times it’s because one of the Follow-up or Do Not Disturb modes is on. If you see it spin for a long time, that’s a sign that Alexa is either trying to pair with another device or updating the firmware.

If none of these seem to be the issue with your Alexa, something really might be wrong.

Let us know in the comments if we’ve helped or ask for additional tips regarding this subject.