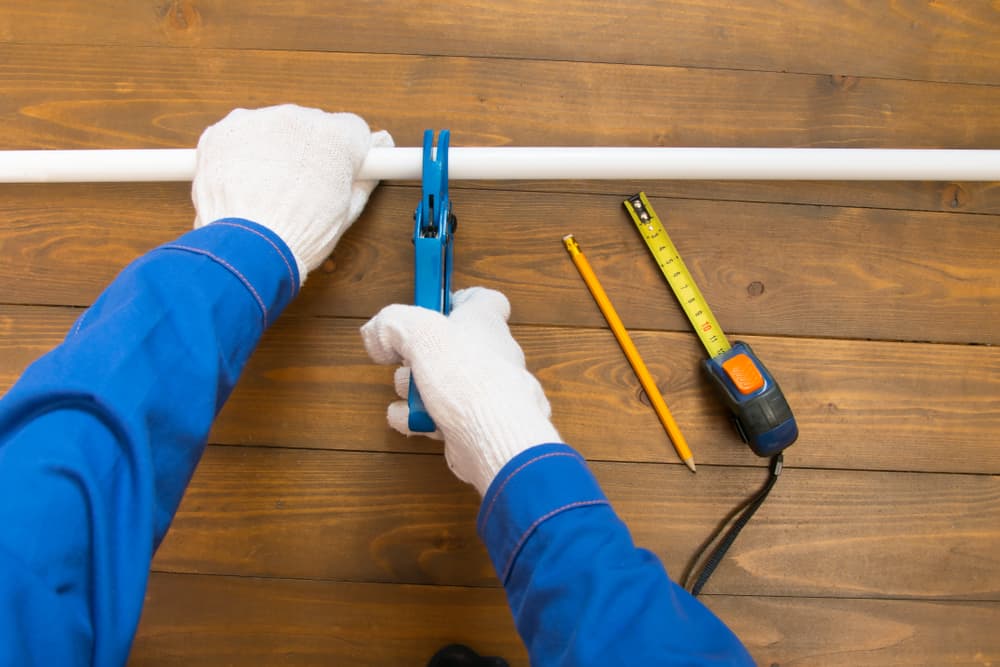 One of the many benefits of PVC pipes is how lightweight, easy to handle, and easy to cut they are. However, if it’s your first time handling and cutting a PVC pipe, it’s perfectly understandable if you’re at a bit of a loss.

So, what is the best way to cut PVC pipe? Is your standard handsaw going to do the trick or are there better tools for the job? Here are the 4 main suggestions every expert would recommend.

Hypothetically speaking, every half-decent cutting instrument can help you cut a PVC pipe if you’re stubborn enough about it. There are a couple of tools that are specifically designed to cut PVC and other plastic pipes, however, as well as some general hardware tools that are also excellent at it.

So, if you don’t want to have to struggle with a kitchen knife or go to the hardware store to get your pipes cut there, here are the 4 best ways to cut PVC pipes at home.

The most obvious tool we’d recommend for plastic pipe cutting is a plastic pipe cutter. These simple tools are essentially one-bladed scissors with handles, no sharp teeth, and a convenient shape for grasping PBV pipes of different sizes and delivering easy and precise cuts.

The reasons why this is the most common way is mostly in the safety and ease of use a PVC cutter provides. With such a tool you can deliver a clean cut without putting your hands at risk in the jaws of the pipe cutter. What’s more, plastic pipe cutters also don’t leave any jagged edges on the PVC pipe that need to be cleaned after and they are very quiet to use.

There is a drawback too, however – plastic pipe cutters can be a bit tiring on your hand joints if you have to use them repeatedly for numerous cuts and pipes at a time. It can sound like a joke, but repeated use of a plastic pipe cutter can literally lead to hand joint problems such as acute arthritis if you’re not careful – just like a bad PC mouse or a musical instrument can.

That’s why plastic pipe cutters are recommended for sporadic residential use by homeowners but are avoided by many professionals – because while the former would only use such a tool from time to time, the latter would need to use it every day, leading to a more significant joint trauma risk.

Additionally, it’s also worth noting that there are two different types of plastic pipe cutters:

This type of PVC pipe cutter is used by biting on the pipe once on the spot you’d like to cut at and then rotating it around the width of the pipe, delivering continuous pressure cuts from all sides.

The second type of plastic pipe cutter is typically larger. It isn’t meant to be rotated around the width of the pipe but rather to deliver continuous “ratcheting” bites at a single spot on the pipe until they cut through it. This type of cutter can be more tiring on the hand as it requires repeated squeezing motions, however, it is more effective versus bigger pipes.

2. Hand saws and other hacksaws

Hand saws, wood saws, and other hacksaws are very common tools in most households and are also perfectly usable for cutting PVC pipes. Unlike plastic pipe cutters, a hand saw doesn’t lead to as much stress on the joints around the thumb and can easily be used for continuous and repeated cutting. 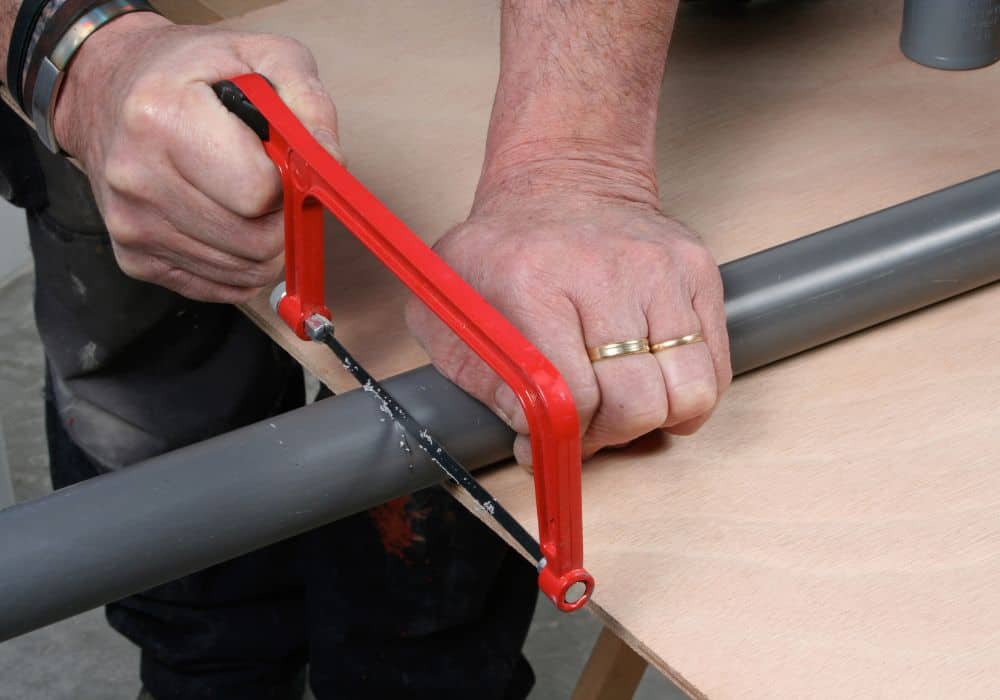 Obviously, a hand saw is also a much more versatile tool that isn’t specialized in pipe cutting only but can be used for all types of tasks around the house or in the workshop. So, while getting a whole pipe cutter can often feel like a waste as you know you won’t have to use it more than once, a hand saw can be a much more worthwhile purchase you know you’ll use on the regular.

That doesn’t mean that hand saws are always “better”, however, as they have their drawbacks too:

Overall, a handheld saw is an excellent tool for cutting PVC pipes but it does require a bit of consideration and precautions before use.

Cable saws are a lesser-known and rarely used tool for cutting plastic pipes which is a shame as they are absolutely excellent at it. Also known as wire saws, these simple devices are so easy and safe to use that a simple 30-second instructional video is all you need to know about them.

You basically only need to wrap the cable around the pipe you wish to cut and then repeatedly pull both ends of the cable toward you until it has cut through the pipe. The risk of accidents is absolutely minimal, the ease of cutting is impressive, and the cuts are usually smoother than with a hand saw although there will still be some flakes flying around.

Cable saws are especially good for the flexibility they offer around tight spaces. If the PVC pipe is already secured in place, can’t be reached adequately with a hand saw, and you don’t want to move it, cable saws can cut almost anywhere and from any angle. This makes them great for plumbing but it’s also why homeowners rarely use them – they are a bit too specialized for regular use.

The heavy-duty solution to your pipe-cutting needs is an electric miter saw. These powerful machines have a big and sharp rotating saw blade that you can simply push any plastic pipe through to cut it in seconds or less. 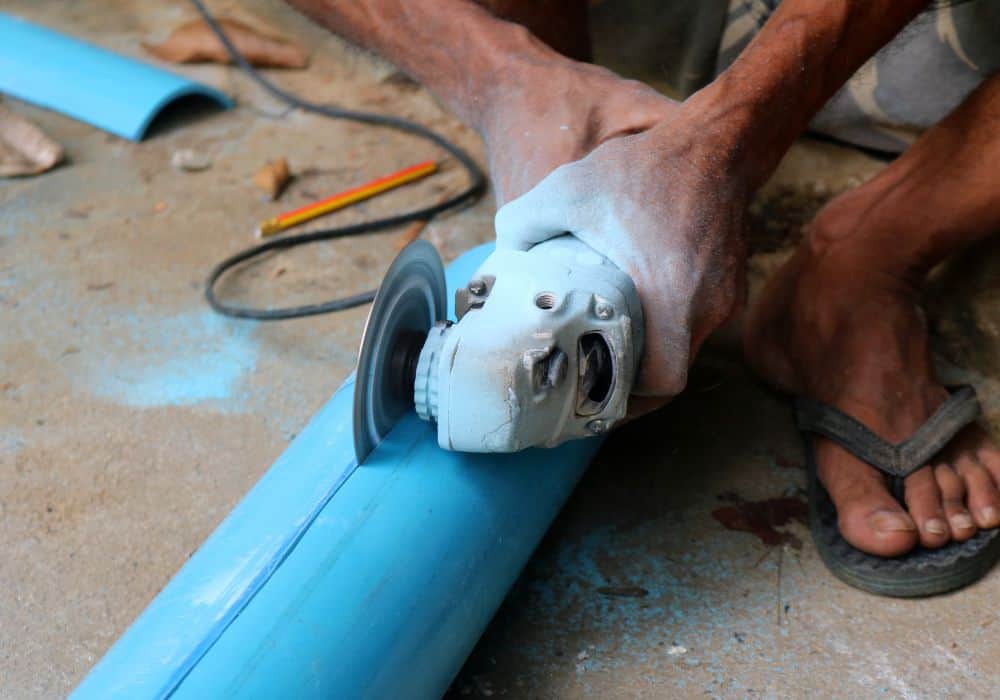 This is arguably the fastest and easiest way to cut plastic pipes of all kinds but it also comes with its own set of drawbacks:

Still, if you have the need, space, and expertise to use an electric miter saw, it’s undeniable that it’d do a great job at cutting any PVC pipe you feed into it.

Before you start cutting

If you want your pipe-cutting experience to be as smooth and effective as possible, there are some precautions you might want to look into, depending on the type of tool you’re going to use.

Namely, it’s worth getting a spray lubricant or even a food-grade lubricant such as cooking oil. The idea is to just apply it on the pipe to make the cutting easier and to reduce the number of loose flakes flying around. 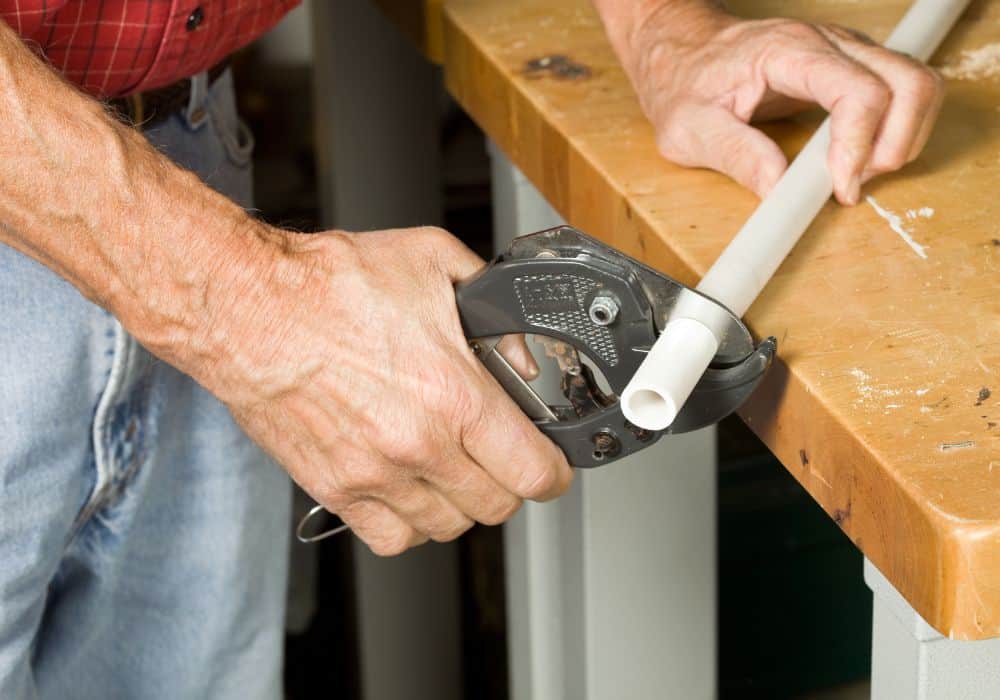 Another good tip is to put a piece of cotton or paper towel inside the pipe so that loose pieces don’t fall into it. Spreading newspapers on the floor is obviously a good idea for the same reason. After that, just consider getting a clamp, a vise, or a helping hand to help you keep the pipe in place while you’re cutting.

If you’re not using a plastic pipe cutter, you might want to do some work to smooth the edge of the pipe off any burrs and jagged edges left after the saw. The easiest way to do that is to just cut the edges off with a sharp utility knife. After that, you can use a piece of sandpaper to further smooth any uneven parts.

In conclusion – what is the best way to cut a PVC pipe?

All in all, cutting a PVC pipe is quite easy but there is still some important know-how to it if you want the job to go smoothly, easily, and safely.

If you use any of the 4 tools above appropriately, even a large number of PVC pipes and cuts will be a breeze to deal with. On the other hand, if you mess up, even a single cut can be a pain to deal with, let alone a health hazard.