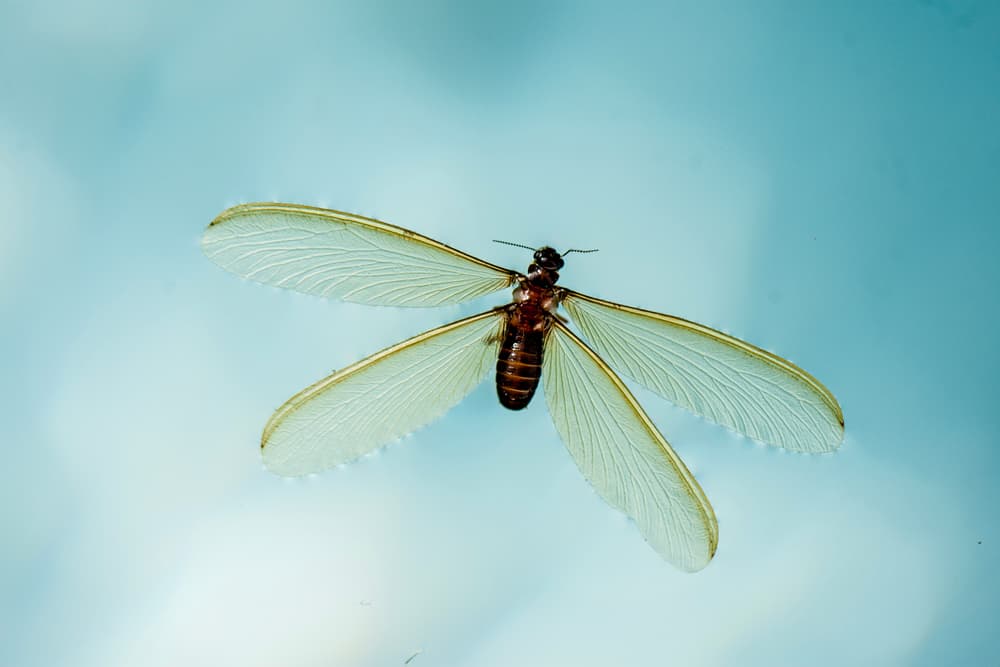 Do you have a pest control problem? Are you concerned about a termite infestation? According to the National Pest Management Association, termites cause $5 billion worth of property damage in the US alone.

As such, it only makes sense that you would be on the lookout. Termites are ferocious bugs that chew on your wood furniture, overhangs, and eaves. They build colonies inside your home structure, which makes the foundation brittle and significantly lowers the home value.

Before spending money needlessly, it’s important to ensure the bugs you found are actually termites. There are several bugs that look like flying termites, and we’ll help you identify them. 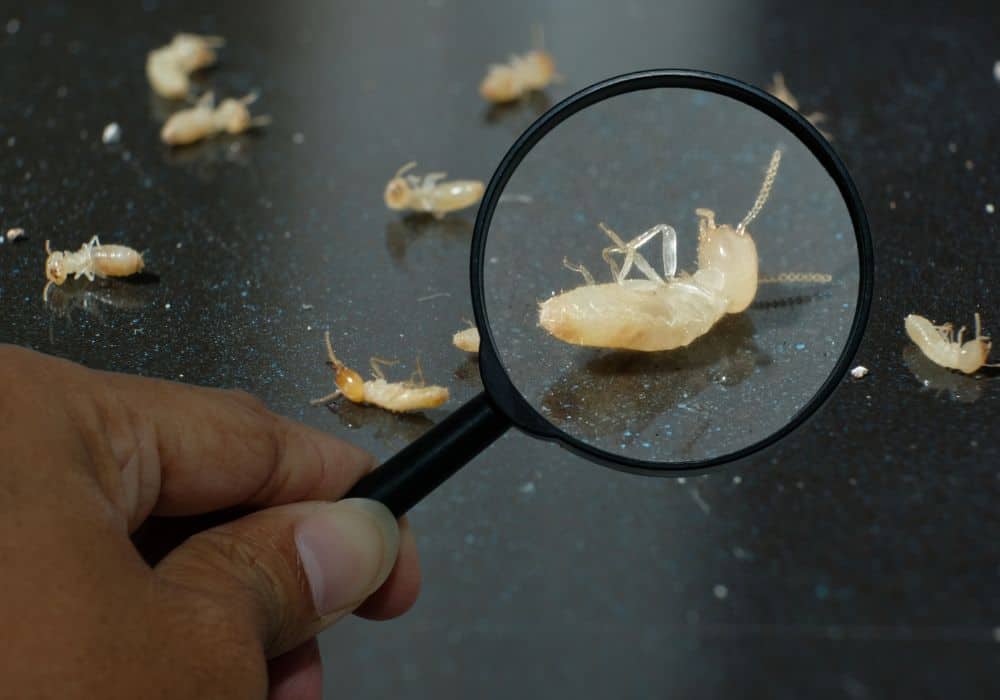 Every time there’s wood damage, people always assume it’s termites, but there are other insects that feed and build their homes in wood. It’s important to know what you’re looking for, so you’ll know when a bug is a flying termite and when it’s another insect. This way, you’ll apply the appropriate removal methods.

Some termite characteristics include:

There are three main types of termites: 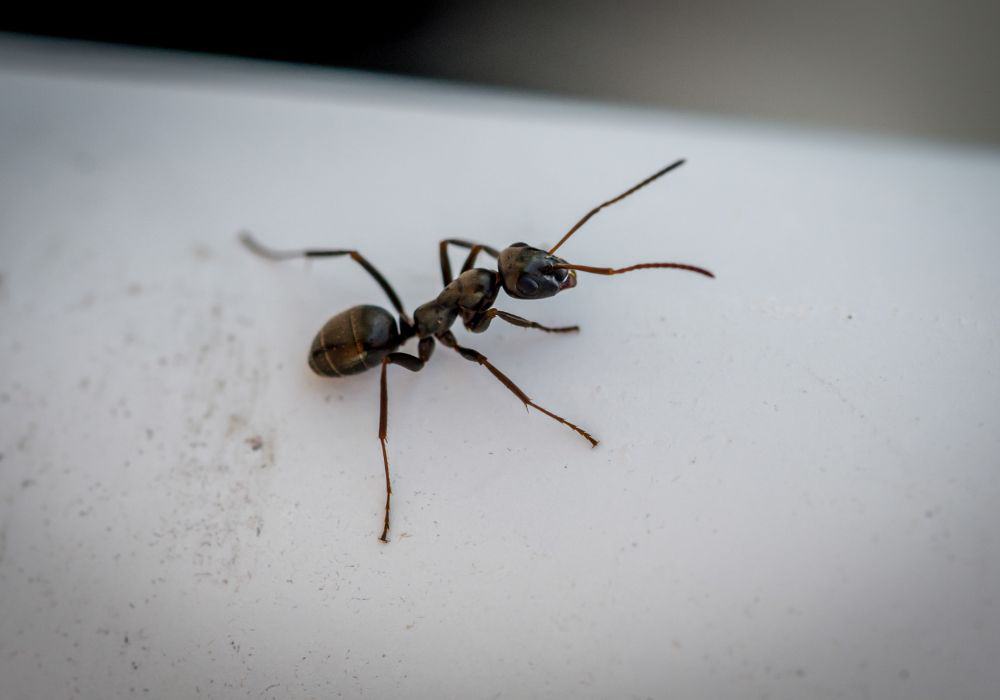 Carpenter ants, particularly those with wings, can easily be confused with flying termites. They are very similar to termites in size, shape, and even color. Carpenter ants have two pairs of wings, just like flying swarmer termites, but their front wings are longer than their back wings.

The body feature that differentiates carpenter ants from flying termites is their narrow thorax. Termites have a wide thorax and broad waist, to the extent that they look like they have two body parts. On the other hand, Carpenter ants have the typical insect look, with three distinct body parts.

While flying termites have straight antennae, carpenter ants have curved antennae. Looking at the damage also helps to determine the type of insect. Carpenter ants build smooth tunnels and often leave shredded wood behind. The tunnels built by termites are rougher in texture.

Carpenter ants normally enter the home through crevices in the door, window, or other openings. They burrow into moist, damaged wood and build their colony. By the time you have a swarm of carpenter ants, the infestation has been going on for a while. Carpenter ants also have strong jaws for biting when threatened. 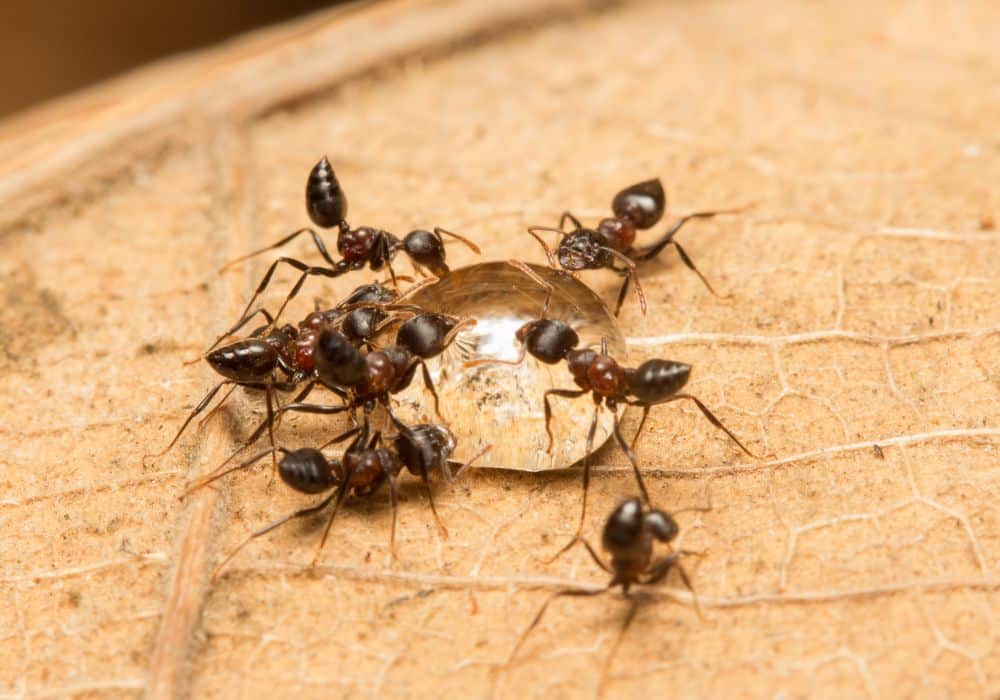 Acrobat ants are typically smaller than other insects, with a narrow thorax heart-shaped abdomen that takes up much of their body size. They also have two curved antennae and two pairs of wings; the front pair is longer than the back pair. They carry the hind portion of their abdomen above the rest of the body, hence the name.

Acrobats do not bore their own tunnels. They often take up space in areas previously inhabited by other pests. These ants like nesting in moist wood and insulation. They are mostly found outdoors, but sometimes you can find them indoors. Since they’re found inside hollow walls, people often mistake them for termites.

Acrobat ants don’t cause much damage, as they don’t bore through the wood to make their own tunnels. However, they can raise issues with electrical wiring, as they often use wires and pipes as openings to get into the house. 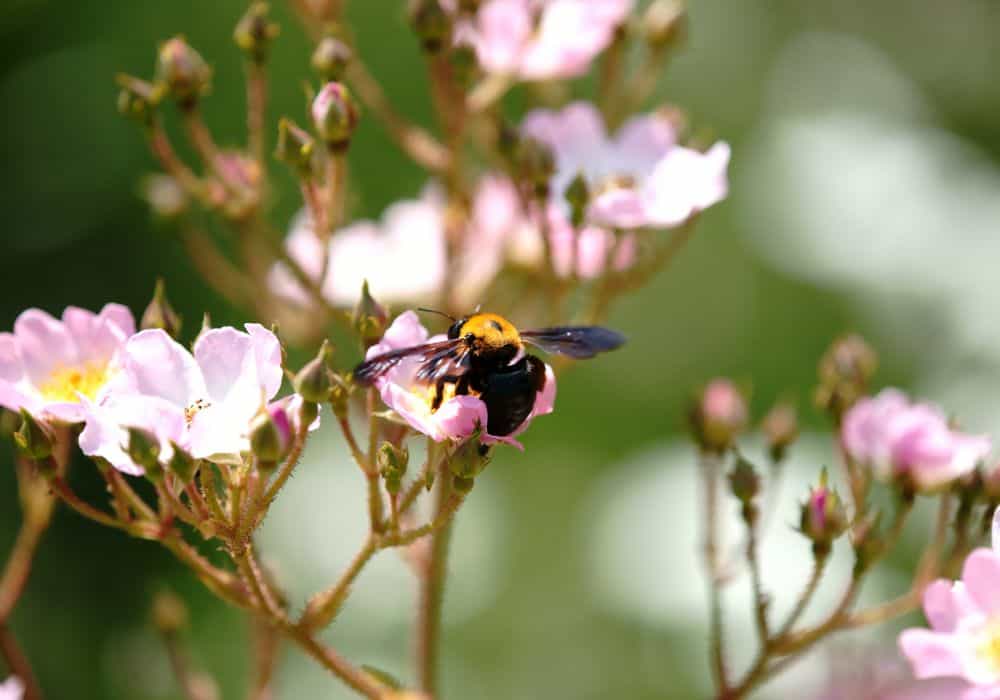 The number one reason people mistake carpenter bees for termites is they tunnel into wood structures and create holes that look like termites’ kick-out holes. One look at the actual insect, and you can tell this is no termite.

Carpenter bees resemble bumblebees, but they don’t have stripes. Instead, they have a round, chubby black body that’s often shiny with yellow fur on the thorax. They live independently, so you’ll only see one at a time, unlike termites which live in colonies.

Carpenter bees don’t cause as much damage as termites and ants, mainly because they live independently, and they only drill tunnels in wood to create a nest for laying their eggs. The holes are typically rounder and wider than termite holes, and sometimes you’ll find yellow waste in the hole.

Most people assume ants can’t fly, so bugs with wings have to be termites. This is a common misconception; mature reproductive ants often develop wings and fly to find new sites, mate, and start new colonies. Ants only fly during the mating season, during warmer seasons.

Just like termites, flying ants also move in swarms, which can be alarming for a homeowner. Other than that, there aren’t many similarities between flying ants and termites. Flying ants have three distinct body parts with a narrow middle, bent antennae, and two pairs of wings, the front set being longer than the back set.

With most flying ant species, you won’t see any wood damage, as they are not wood-boring insects. They can still infest your home for food, so if you notice a swarm of bugs in the kitchen or pantry, they could be ants and not termites. 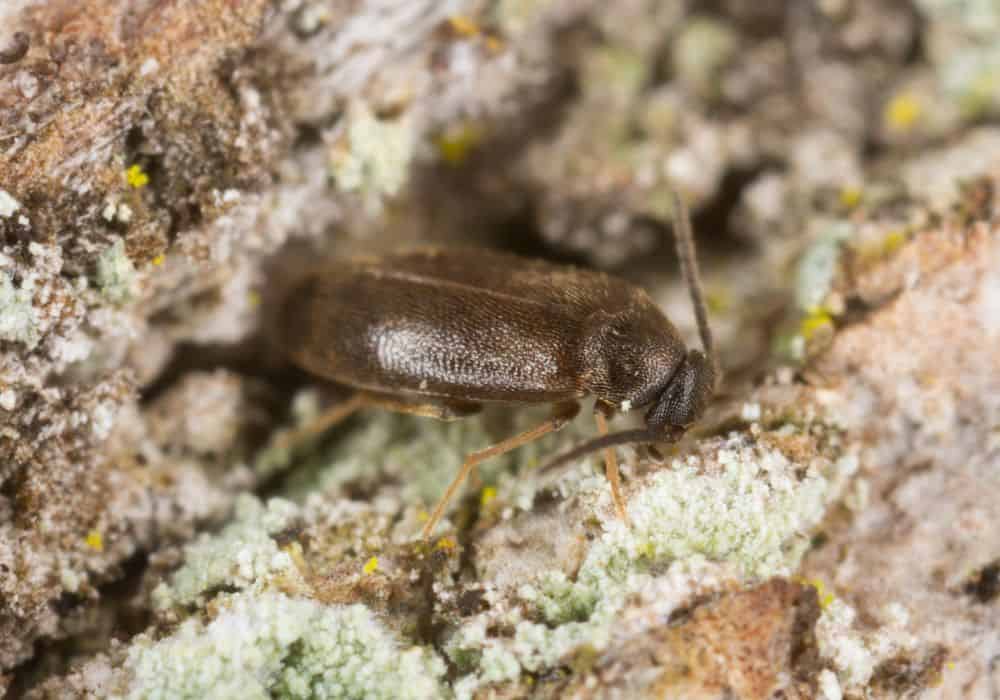 Powderpost beetles are a specific wood-boring species that typically inhabit areas with high temperatures and humidity. They typically seek out damp wood, so you might find them in the barn, basement, or outdoors where the lumber has been stored.

Powderpost beetles are mostly dark brown, and around the same size as termites. They have a round head, a small thorax, and a very long abdomen. Swarming beetles have two pairs of wings. The front pair is very rigid, and the rear ones are the ones used for flying.

Powderpes beetles are only active at night, so you most likely won’t see them, just the damage they leave behind. They chew out the holes to exit the nest after building it. Typically, the damage takes the form of tiny holes with a flour-like wood powder on the ground beneath the damaged wood. 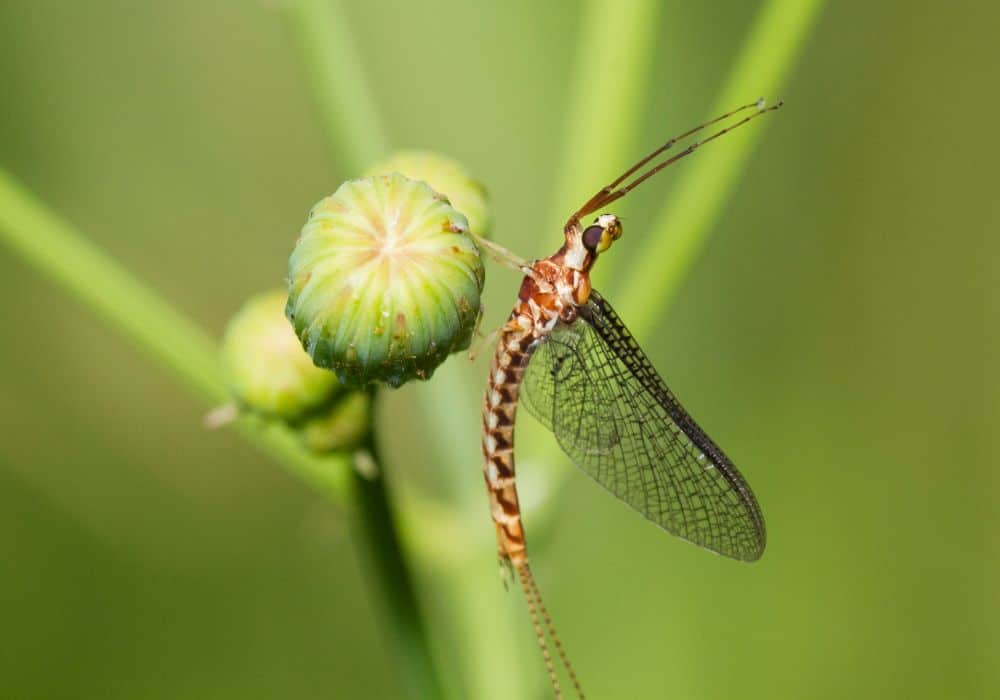 Mayflies in flight look like termites, but they are very different on close inspection. Unlike flying termites, mayflies are typically light in color, and their rear wings are relatively smaller than the front pair.

Mayflies are most active in spring and summer, which is around the same time drywood termites are active. Another similarity is they become very active after a downpour, a behavior exhibited by flying termites.

You will often see mayflies gathered on doors and window screens, attracted by light. Since they lay their eggs in water, mayflies are most prevalent in swampy areas.

Signs That You Have A Termite Infestation Problem

Don’t wait until you’ve seen a termite before you take action. They are very good at hiding, so it’s better to look out for warning signs and conduct a termite inspection before it’s too late. Some signs to look out for include:

Termites are pesky pests that cause millions worth of damage every year, which is why you should be on the lookout at all times to avoid infestation. Still, you might end up spending a lot of money on a problem you don’t have when you wrongly identify the bugs in your home.

Hopefully, now you’re armed with enough knowledge to differentiate between termites and look-alike bugs. This information is useful because it helps you choose the most appropriate removal methods. When in doubt, always consult a professional to be safe.

If you have any questions about termites and other pest infestations, don’t hesitate to leave a comment below, and we’ll be in touch!