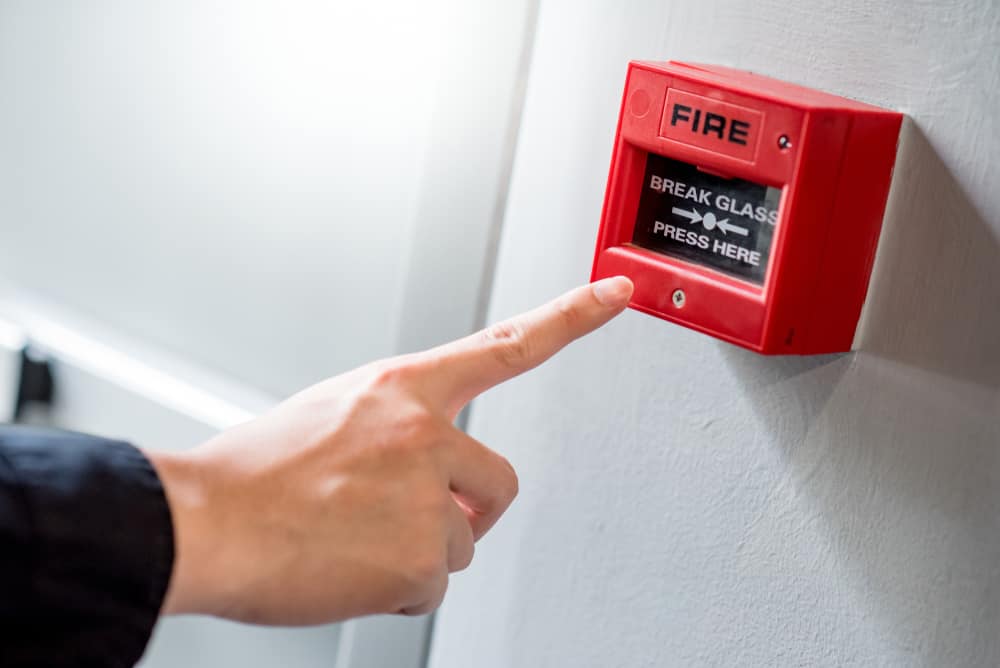 Is your fire alarm randomly going off for a few seconds? If so, it can be incredibly annoying, especially if you are trying to get to sleep. You wish you could just throw it away but you know that you need this vital safety device to be working correctly.

Fortunately, this is something you don’t have to put up with, as we will tell you all you need to know about fire alarms. We’ll look at the different types out there and what you can do when they start beeping. Let’s get started!

There are two types of smoke alarms, ionization detectors, and photoelectric detectors.

Ionization smoke detectors have a small amount of radioactive material, Americium-241, which is a byproduct of nuclear fuel. It gives off alpha particles, which strike the air molecules and disintegrate them.

That will result in some of the broken parts being positively charged and others being negatively charged. And the positive and negative battery terminals on the smoke detector’s battery will be drawn to those two oppositely charged ones.

The sensor reads that and would start beeping. This kind of smoke alarm is more receptive to flaming fires, which have a lot of black soot. 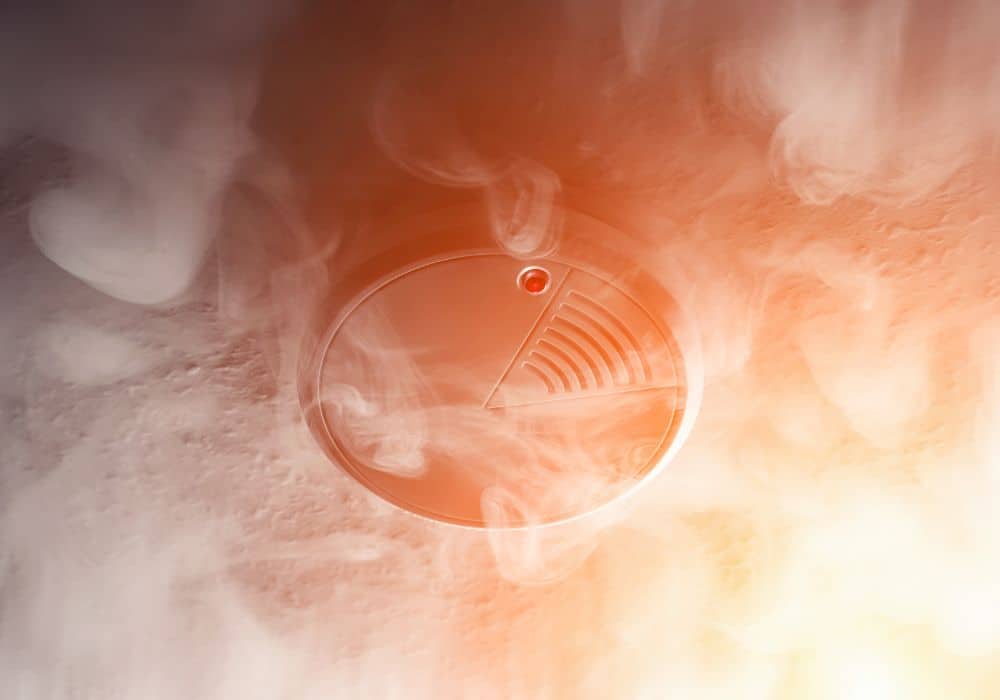 On the other hand, the use of photoelectric technology is more recent and gaining popularity. The idea is the same, although the main difference is that there’s no radioactive material.

If there are no particles in the sensing chamber, a light beam that is shone inside won’t hit the detector. The amount of light reflected onto the detector will exceed a threshold if smoke is detected, setting off the alarm. Photoelectric detectors are typically more responsive to smoldering fires.

3. Which Smoke Alarm to Use

So now you know both types of smoke alarms. But the real question is: Which one to use? The National Fire Protection Association (NFPA) advises installing both varieties of alarms if you want to ensure that you get the best of both worlds, as they have their own strengths.

4. How To Turn Off a Fire Alarm

Okay, so you’ve checked the area and are sure there’s no fire. Depending on the fire alarm’s model, holding the hush button on the front panel for varying lengths of time will have different functions.

It might be labeled as a “test” or “silencer.” You may refer to your model’s instruction booklet if you still have it. But a smoke alarm is usually reset by pressing and holding the hush button for at least 10 seconds. The alarm will silence after pressing this button.

Causes and Solutions for a Faulty Smoke Alarm

One common cause is low or dead batteries. Most smoke detectors are built to go off when the electrical current drops. This is so that smoke in the air won’t cause the current to increase. The current passing through your sensor decreases as your battery gets weaker.

When the alarm suddenly goes off, that’s the only time that they would check if the battery needs to be replaced. To be sure, you should replace the batteries every six months. You may want to change it at about the same time each year (twice), so you’ll never forget it.

You might also want to test if the battery is still working. To do so, press the button on the front of the panel without holding it down. If the alarm sounds clearly and loudly, everything is in working order. On the other hand, if there is no sound, the sound is garbled, or the pitch is bending, then it definitely means that you have to change the battery.

Another possible reason for false positives is installing your smoke detector inside or near the bathroom. The steam from a hot shower may occasionally trigger your alarm. Similar to what smoke does, shower steam can obstruct the flow of the current.

As a result, smoke detectors might be unable to recognize if it’s smoke or moisture in the air. Furthermore, smoke detectors are usually not waterproof, so moisture can harm the circuitry, so putting the smoke alarm too close to the bathroom is not a good idea.

If you reside in a region where there’s high humidity, there is also the possibility that the heavy water particles are causing your fire alarm to go off.

To ensure this doesn’t happen, maintain the movement of air inside your house, such as putting on a fan or opening a window to let in some fresh air. Don’t put your smoke detector near

The kitchen is the most likely place for a house fire to originate, so it seems logical to put a smoke alarm there. However, cooking can frequently cause false alarms. Even just the smoke from burnt food can be enough to trigger the alarm.

It is more advisable to install a heat detector instead. It goes off when the temperature rises above a predetermined threshold. For maximum protection, it’s best to integrate heat detectors into a system, complete with smoke alarms in other areas. It might be insufficient to have heat alarms alone.

If your house is newly painted, your smoke alarms might get triggered. The fumes that come off paint can be enough to trick the detector into thinking that it’s smoke and can cause the electric currents to break.

Most modern sensors already have good tuning compared to sensors ten years ago but they can still have false positives. Instead of using insecticides and cleaning products with harsh chemicals, you might opt to go natural, as these can also cause false positives. Moreover, try to keep your home well-ventilated to increase airflow.

Like smoke, dust can reflect light particles, giving you a false positive. It might be time to clean your smoke detector. Simply take off the outer case and you might notice an accumulation of dust inside. Eliminate any big pieces of debris. To get rid of tiny particles, use an electronic aerosol cleaner or vacuum attachment while paying careful attention to the sensors. Exercise caution while cleaning, as you don’t want to damage the sensors. 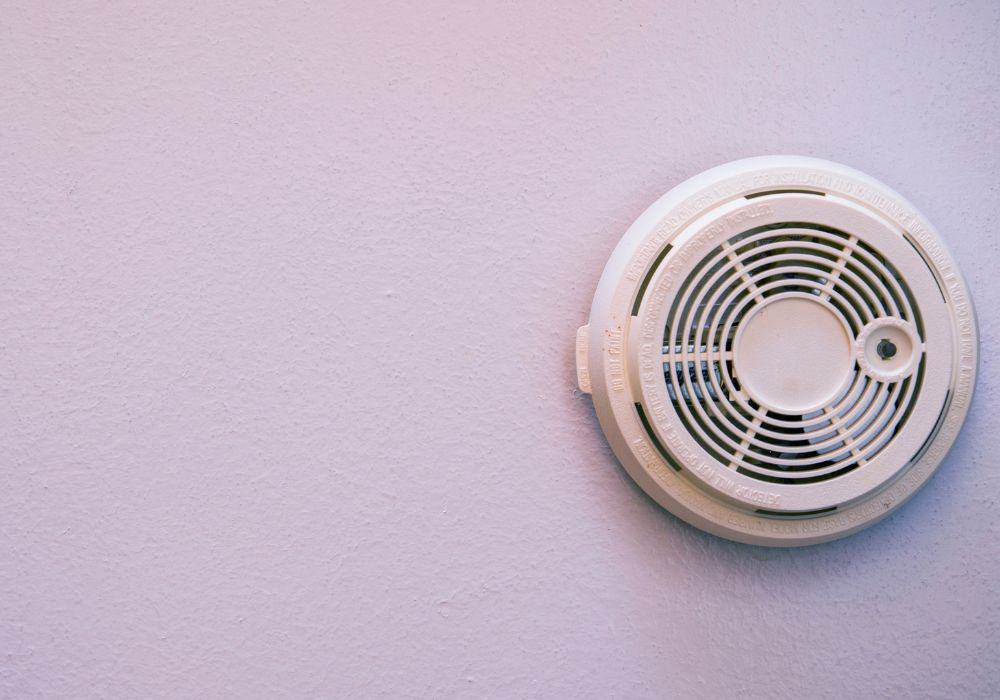 Yes, you’ve read it right. Your home’s dark corners are a bug haven, so it’s possible that bugs will settle within a smoke detector. Even just the smallest movements from these creepy crawlies can be enough to trigger the alarm. If insects are a problem, you might want to spray some pest control around your smoke detectors. But don’t spray directly on the alarm, as the electronics are susceptible to harm.

7. Faulty Product or End of Life of Smoke Alarm

After checking everything mentioned above and you still find yourself being disturbed by the unexpected beeping of your alarm, it might be one of two things: you’ve bought a faulty product, or the smoke alarm has become faulty over time.

Smoke alarms undergo extensive testing before being put on the market, but there might still be a chance that you have purchased a defective model with a weak electrical current.

On the other hand, if your fire alarm is already ten years older or more, then its sensitivity might indicate that it’s time for an upgrade. Either way, it’s time for a new alarm. 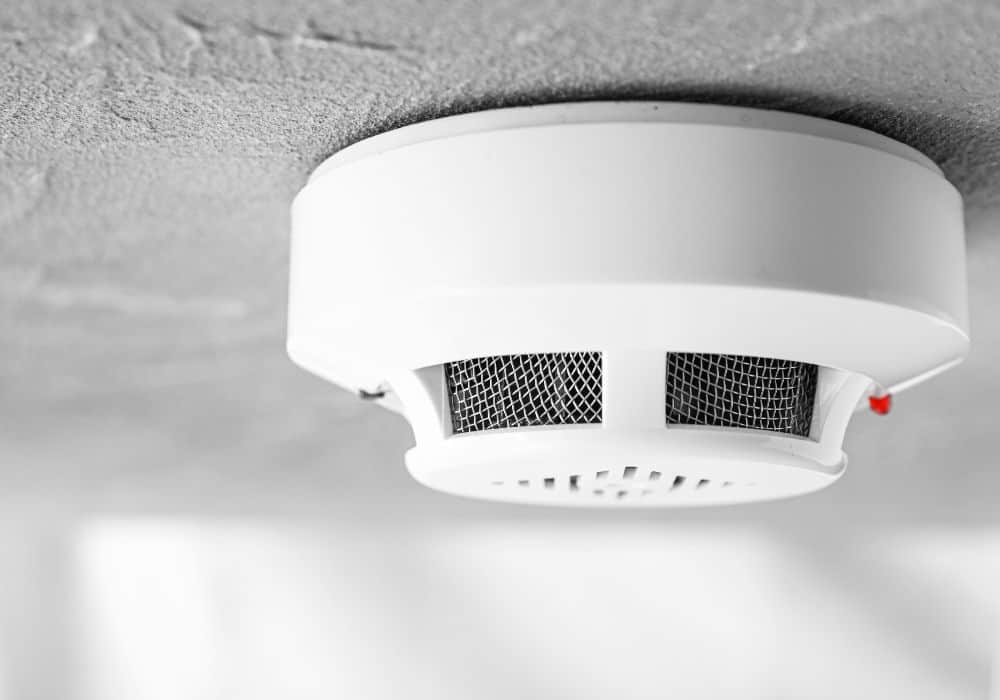 In addition, linking it to your mobile phone enables you to turn off false alarms immediately. Another benefit is being able to integrate with other systems.

You may, for instance, include a smoke detector that connects to your home security system, letting you assess the situation in your house and alert emergency personnel in the event of an incident.

A smoke alarm could be quite annoying, especially if it suddenly goes off in the small hours of the morning while you are sleeping soundly. But it doesn’t mean you have to do without this vital device to ensure your family’s safety.

If your smoke alarms get triggered without any smoke, go through our list here to check if it’s time for an upgrade. Most of the time, you need to replace the batteries. If you’ve checked everything and you still get positives, the best thing to do is buy a new fire alarm system.