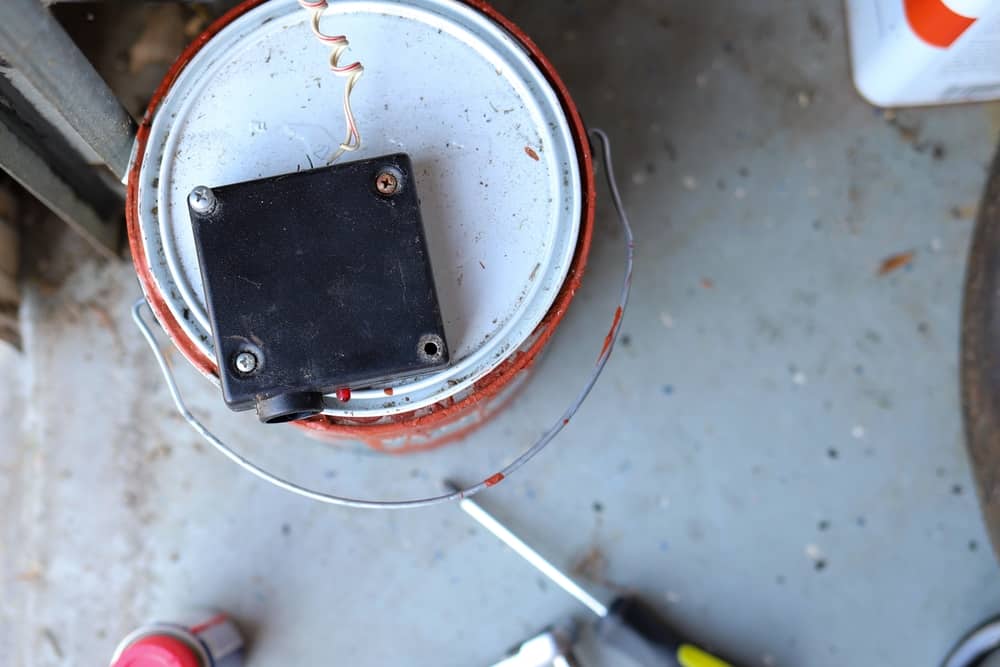 And when you glance over the sensors, you see a yellow light on one of them and wonder about the meaning of that garage door sensor’s yellow light. Is there something wrong with that sensor? Or maybe it’s the other one, and this one is just signaling an error?

Not knowing will make us think a ton of rational and irrational stuff. But do not fear because we’ve got you covered. We’ll tell you what causes that yellow light and why your garage won’t close. We’ll also tell you how to deal with it, so read along!

How Do Garage Door Sensors Work?

We told you why the garage door doesn’t close when there’s something underneath it. You probably already knew that. But do you know on what principle the garage door sensors work?

There are two sensors on all garage doors – one on each side of the door. These two sensors “communicate” when one of them, the sending sensor, shoots an infrared beam to the other one, the receiving sensor.

If this beam is not interrupted, there is no object or person between the sensors, i.e., under the door, and it can be closed safely.

But if the beam doesn’t reach the other side, the door won’t close. When this happens, the LED light on the sending sensor will start to blink yellow. Receiving one uses the solid green light. 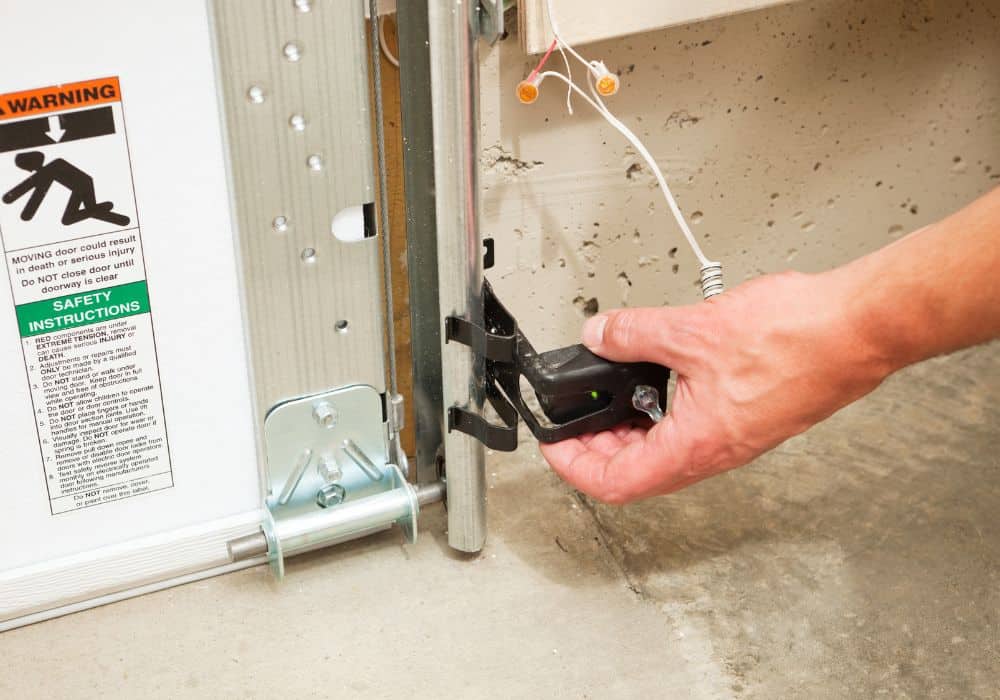 If garage door sensors had a motto, it would probably be: “Hiding in plain sight.” We pass by them every day, but rarely, or better said, we never notice them. This lack of attention to them results in our forgetting their existence, which translates to failing to maintain them.

When sensor eyes are not appropriately maintained, sooner or later, dust and dirt start to accumulate on them, not allowing them to transmit or receive a signal. The end result of all this is you not being able to close down the garage door.

Besides the fact that they are quite well “hidden”, the sensors are also located in a very convenient place for something like this to happen since they are elevated from the ground by only a few inches. Even if you don’t use the garage door that often, exposure to wind and sunlight will have an effect.

As you can probably assume, this is an issue that is easy to resolve. All you have to do is clean the sensor eyes with a damp cloth or napkin. If this was really the problem, your door should start working normally again.

2. Something Is Blocking The Line Between The Sensors

In order for the transmitter sensor to shoot the infrared beam to the receiving eye without problems, there must not be any objects on the path between them. Therefore, if the sensor’s yellow light blinks and the door does not close, there is a possibility that something is standing in the way between the sensors.

Larger objects usually found in the driveway or garage that could be an obstruction, such as a shovel, bicycle, or wheelbarrow, are hard to miss, so we doubt it’s this. A fallen branch is a more likely culprit.

Either way, just make sure there is nothing blocking the safety sensors.

Perhaps the most common reason you can’t close the door is the misalignment of the sensors.

For this to not happen, the sensors must not only be placed at the same height but also set at the same angle and face each other. Having the exact angle is important for proper alignment and ensuring the sending eye hits the sensor on the other side.

Misalignment of the sensors can occur in several ways. For example, one side of the garage door can loosen a little, allowing a sensor to drop down slightly. Another possibility is that you or the person who did the installation tuned them so that they only needed a fraction to move and no longer be aligned.

However, the most common cause is the loosening of the screws that fasten the sensors and keep them pointed at a right angle.

If the two previous solutions did not solve your problem, it is time to look at the sensor’s positioning.

You should first make sure that the sensors are installed at the same height. After that, check their alignment. If they are not aligned, you will have to unscrew and realign one or both of them.

Garage door openers use ordinary screws or wingnuts for tightening, so you will need a screwdriver or wrench to loosen and tighten them after.

4. Damaged, Worn Down, Or Disconnected Wires

The next thing you need to check if none of our advice has helped you so far is the wiring connections.

Depending on how the technician installed the sensors and wires, it may happen that they overtightened a wire, which, over time, could lead to its splitting or disconnecting. Not tightening the wire hard enough is another reason why it could disconnect.

Of course, the technician may not be at fault at all. Wire just wearing down is another possibility. After all, no one expects it to work forever.

If bad wire(s) is the reason why garage door sensors are not working, before you change it, it is essential to try to figure out what caused this in the first place. That way, you will not make the same mistake in the future.

If it is wear and tear, this shouldn’t be a problem because this happens rarely, and if we are being frank, there’s nothing you can do about it.

If you think the wire failure occurred because some sharp or heavy object was leaning against it and eventually cut it, be careful what kind of things you leave near the sides of the garage door. Finally, in the case of wires being over or under-tightened, ensure everything is done by the book next time.

Reconnecting a wire is something you can do by yourself, but if the issue is a broken or withered wire, it is better to call a professional to replace it. 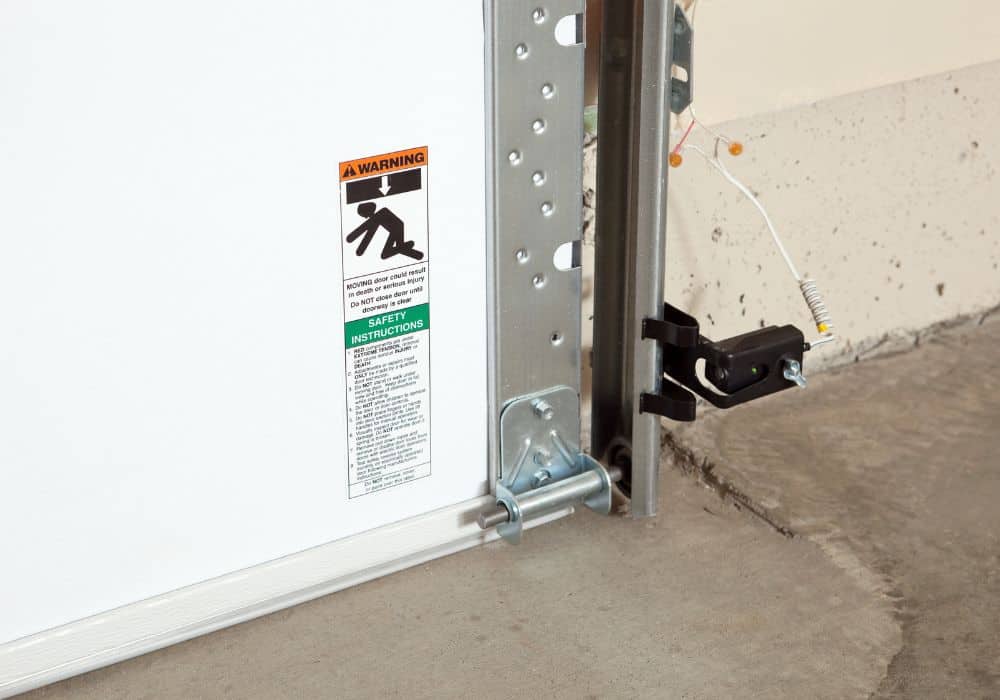 Since you have reached this part of the article, we will assume that the previous causes were not to blame for the yellow light blinking and the door not opening. So, let’s try with the last fix!

As is the case with any electronic device, sensors can and will stop working at some point. It can happen because they have been in use for a long time, but also due to weather conditions and the environment.

Unfortunately, you can’t control any of these factors. However, if you buy quality safety eye sensors, they will not cease to function quickly, so do not despair if it turns out that your sensors need changing. Below we will detail how this is done. It is a process that you can do by yourself in a few simple steps.

One last thing we should mention in this section is that sometimes only one of the sensors is old or malfunctioning and should be replaced. So, you first need to check the sending one. Then, if replacing it with the new sensor does not fix your problem, you should also change the receiving one.

All the problems we have listed have relatively simple solutions for which most people will not need to seek the help of professionals.

However, it is possible that the fixes we listed will not solve the problem of the yellow blinking light and garage door not opening. So, what to do in that case? Well, then, you really need to call someone whose job it is to know what’s the problem.

A garage door sensor blinking yellow is an issue that can occur due to multiple reasons. The most common one is misaligned sensors. Dirty sensors or sensors which can see each other because something’s blocking the path between them are the other two, which are easy to solve.

When it comes to more serious issues that cause this problem, damaged wires or old sensors are the most notable culprits.

Sometimes, however, none of these things are to blame, and you just have to call the experts to find the answer.

Got questions? We’ll help you with them if you let us know about them in the comments!