Skip to content
Pip's Island » How Much Does R-410A Freon Cost Per Pound? (Price Guides) 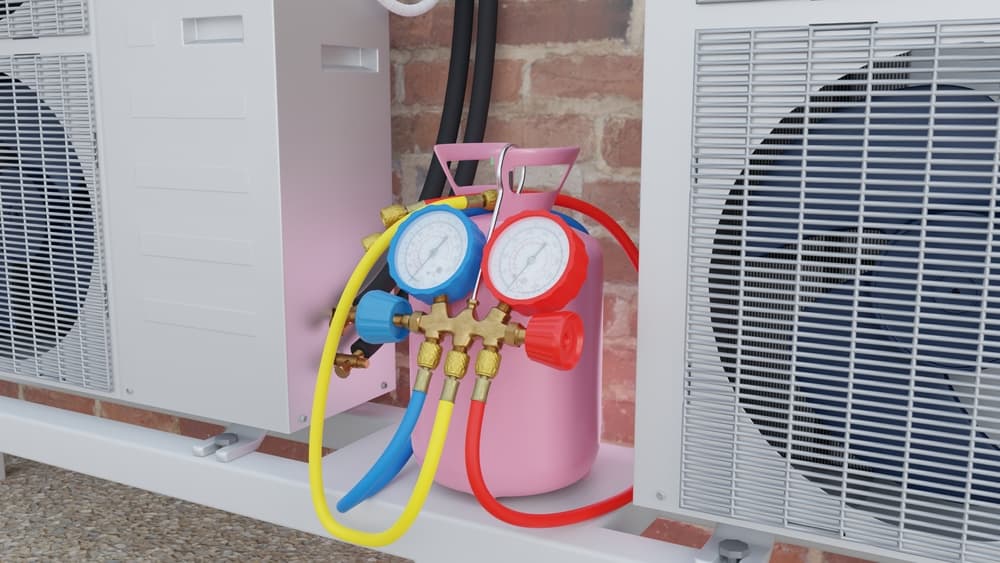 The r-410a known as Puron is an excellent refrigerant that marked the end of r22 and set the standard in the country as the most preferred choice for homeowners. It is free of ozone-depleting gasses chlorine or bromine as it is mainly made of fluorine, making it a safer, cleaner, and legal alternative.

Since the r-410a is an absolute necessity for modern homeowners, this question-and-answer piece aims to walk you through the cost of the r-410a Freon. 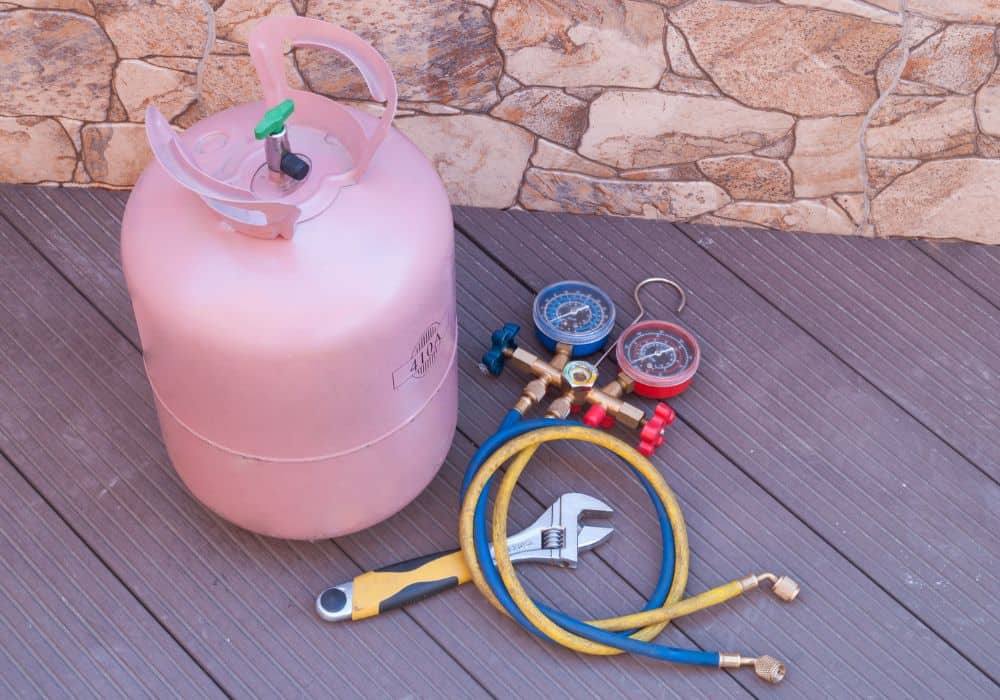 What is the Cost of Refilling an HVAC with r-410a Freon Refrigerant?

As a homeowner, it is estimated that you’d need 2 to 4 pounds of refrigerant/ton to power your air conditioner. So, if your unit is 3 tons and you use 3 pounds of freon per ton, you’ll need 9 pounds of r-140a Freon refrigerant.

In addition to this, it is crucial you hire an HVAC technician to help you refill your air conditioner since this will help you save money that you would have otherwise spent buying a 25-pound tank. Installers must mark up the cost of the R-410A Freon to make a profit off it.

So, if the technician makes $40 per hour, you’ll most likely be paying $50 per hour to the company, which will eventually pay the technician. Alternatively, you can hire a self-employed HVAC contractor. They are usually cheaper, however, you run the risk of engaging the services of a rookie to the job.

Note 1: R410A is popularly referred to as Puron. Puron is the primary brand name linked with this variant of refrigerant.

Note 2: Freon is a generic term used by contractors and engineers for any coolant used by air conditioning units.

How Much Does it Cost to Fix a Freon Leak?

To fix a freon leak, you must consider the AC Unit’s age, the extent of damage, affected parts, and accessibility. The following parts are the outlets through which the refrigerants leak and here’s how much replacing them will cost.

How Much Does it Cost to Convert R-22 Refrigerant to R-410A?

Since the Government of the United States banned the production and importation of R22 coolant in 2020, many homeowners have considered and moved to convert their air conditioning units from R22 to R410A. Although possible, doing this is expensive ($2,200 to $4,800).

Another downside is that it may not pay off in the long run since r-410A coolant operates at a higher pressure level than R22. Hence, converting it would involve flushing your lines, changing your air conditioning unit, getting a metering device or condenser, and generally making room for a smooth transition.

Now, we’re not throwing away the idea of converting the r22 to r410a; we advise that it’s more money, time, and labor-saving to get a replacement with an updated r410a coolant.

Besides, r22 is not so safe for the environment as it gradually depletes the ozone layer. So to safeguard the world and humanity at large, take our advice and get to work.

Note: There’s another AC refrigerant in the works positioned as a replacement for r-410a called the r-32, which has a reduced global warming potential compared to the former. r-32 is a pure and single-component refrigerant.

Why Does r410a Freon Cost So Much?

Addressing the growing cost of r-410a in recent times is necessary which is due to the following reasons.

This move caused a price rise in refrigerants made by both China and American companies. A win for manufacturers, but has a negative effect on consumers.

Note: From 2023, r-410a is scheduled for total elimination from new units.

What is the Cost of Recharging an Air Conditioning Unit? 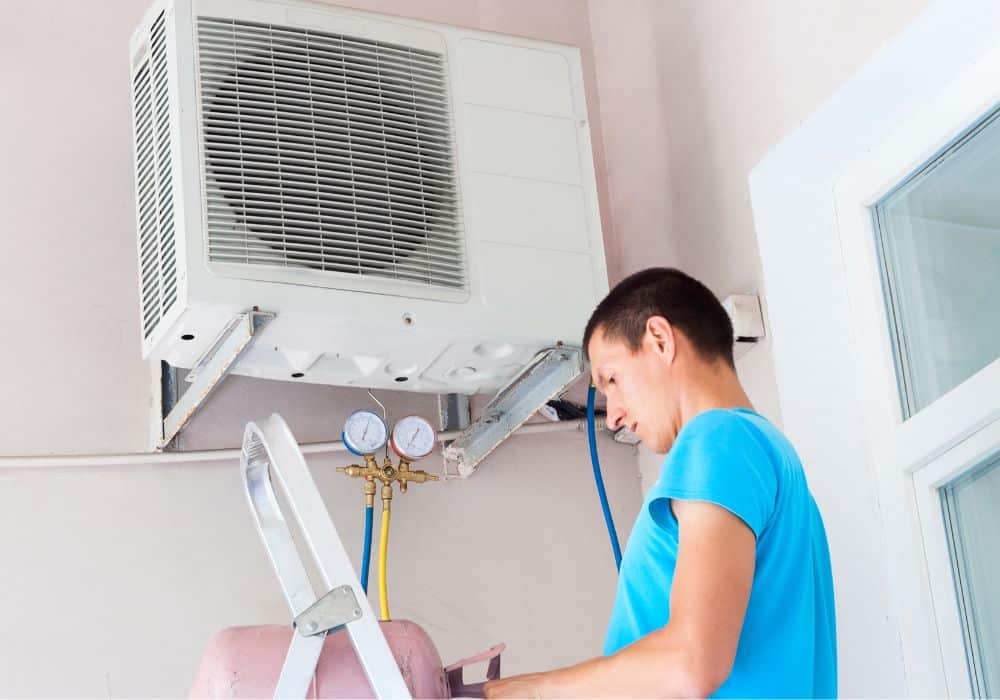 Perhaps you’re wondering what it means when the HVAC contractor brings up the issue of home AC recharge. Well, it simply means to top off your unit with more refrigerants to maintain an equilibrium and standard pressure.

The average national cost of recharging your home air conditioning unit will set you back about $225 – $700, depending on the size of your unit and the type of refrigerant you’re using.

Here is a detailed breakdown;

Mini split ACs cover more space than window AC units and recharging them runs between $100-$300 depending on the extent of the leak and labor cost.

A central air conditioner, which is the largest and most complicated system with the ability to cool the entire house costs between $150-$600 for a proper recharge. Important parts of the central AC include an evaporator coil, ducts, pipes, an outdoor unit, and an indoor thermostat.

Recharging a home air conditioner takes between 1-3 hours. It takes about 10 minutes to refill a pound of Freon, and air conditioners require 2 to 4 pounds of Freon per ton.

Cost of Other Refrigerants Per Pound 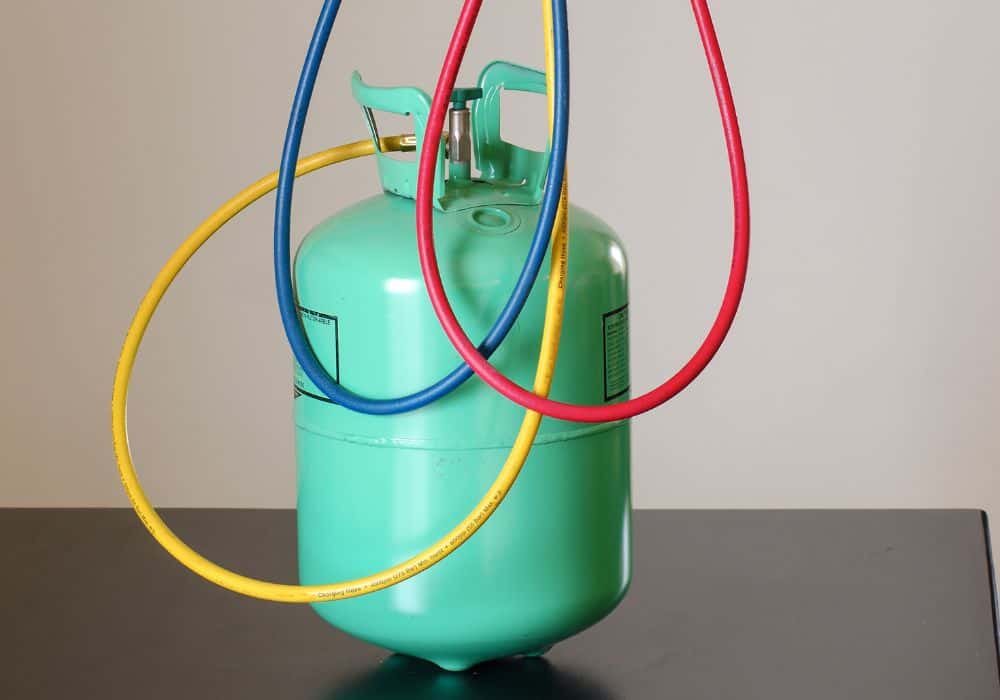 It’s not news that R22 Freon is already phased out. However, many alternatives are available for homeowners to use for their air conditioning units. we’ll check out a few below

This refrigerant is a safer alternative to r22 as it is environmental-friendly and averagely ranges between $4-$7 per pound. It’s an excellent choice for a medium-temperature refrigerator and holds a lower global warming potential than other refrigerants like R404A and R507.

R134A is a suitable replacement for r22 and is mostly used for high-temperature units. A pound of this coolant ranges between $4-$5 and is certified safe for the environment, A number of homeowners have included R134A in their AC units.

The average price for R407C per pound is between $5 -$7 and contains three other coolants- R32, R125, and R134A which makes it very suitable for usage and medium-temperature air conditioning units.

R421A is a double-component coolant, making it one of the safest R22 replacements available. A pound of this refrigerant costs between $6 and $9 with easy installment into a home or commercial AC system in a few minutes.

This coolant is a top choice owing to its few components which ensure that less fragmentation occurs even at high temperatures enabling seamless operation.

Another solid replacement for R22, this coolant has the old R22 Freon pressures and capacity but a better efficiency than the new coolants. It’s suitable for home and commercial AC units and works perfectly under mild to medium temperatures.

R427A has been on the list of popular substitutes for R22 since 2005 and still holds in place in the market to this day. A pound of this coolant ranges between $10 to $11.

As stated, you’re not allowed to purchase r-410A freon if you’re not 608 certified. They only come in 25-pound cylinders or bigger and you must use the proper installation tools and have the technical knowledge.

Doing it yourself or hiring a stranger to help may incur extra costs and land you severe fines from local area laws on who can and cannot handle refrigerants.

Only EPA Section 608 of the Clean Air Act verified technicians can buy refrigerants in the USA. Mishandling refrigerants can lead to prison time, fines summing up to $15,000 or more, and criminal prosecution.