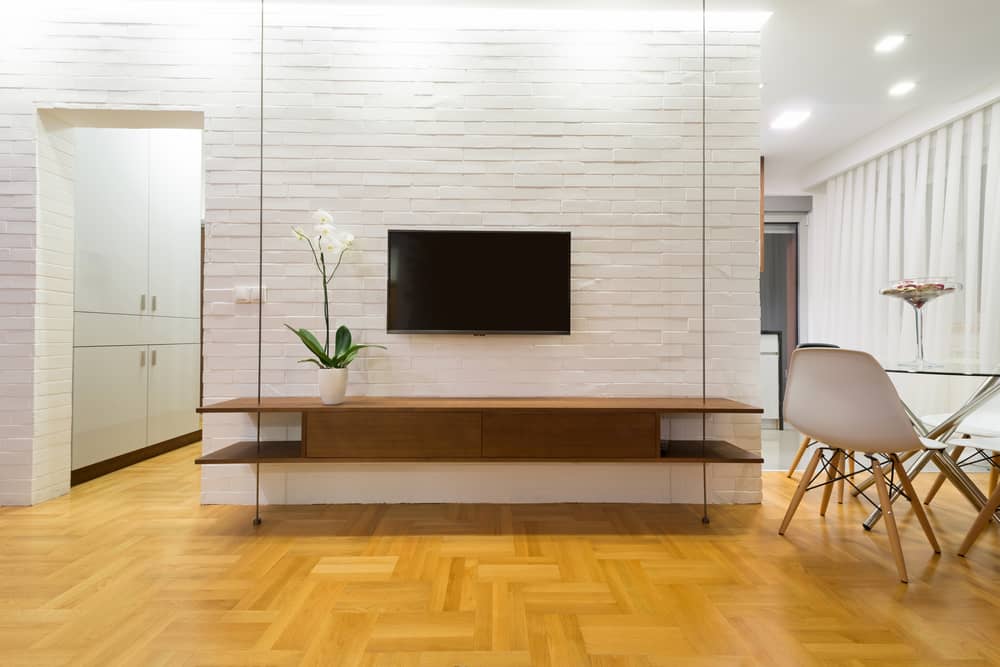 The days of old bulky televisions with cathode ray tubes are far behind us. Nowadays, our homes are decorated with LCD and plasma screens, which seem to get thinner and lighter every year. And let’s not forget the better visual experience!

As the TVs become thinner, the possibility of mounting them on the wall also increases. And that’s what most people want! Of course, the most straightforward way to do this is by attaching the TV to the holes drilled in the wall. But what if this option is not on the table?

What if you don’t want any wall damage in your own home, or maybe you aren’t allowed to do it in a place you’re renting? Then you probably wonder how to mount your TV without drilling holes. Stick around because we will give you six methods on how not to have to deal with screws, drill bits, dust, or debris.

How To Mount Your TV Without Drilling Holes?

Let’s start with a wild one! The mere thought of a TV glued to a wall probably does not inspire confidence in anyone. The reasons for this are easy to understand. Tapes that most of us deal with are pretty light and can’t hold weights heavier than a couple of ounces, while TVs are, well, huge and heavy.

Using tape to mount a TV to a wall seems like a disaster waiting to happen. But what a lot of us don’t know is that there are industrial-strength double-sided mounting tapes that can hold weights well over 30 lbs.

Besides that, another great thing about this solution is that it’s probably the most elegant and practically invisible.

It’s also easy to implement, as you just need to tape the adhesive to the wall and then the TV bracket, which you previously mounted to your TV, to the adhesive. Be careful when doing this because you want the tape to glue to the wall fully. The same goes for the mounting bracket.

One thing you definitely need to consider before going this route is the size of your TV. A standard 65-inch will weigh between 50 and 60 pounds, so even though there are some pretty strong adhesives out there, you might not find one that will be able to hold your TV.

As its name says, these items should only be used on brick walls. They’re equipped with a saw tooth edge that helps them hold the brick on their upside and a spring that presses against the brick on the downside.

When you go to your local hardware store to buy brick clips, look for the ones that are appropriate for your wall. Also, you should know that you can’t place them just anywhere. To find the best spots, look at the mortar’s depth since there should be some space between the front edge of the brick and it.

Of course, brick clamps are not all-powerful and can’t carry large weights, which means that massive screens aren’t really an option. However, a brick clip made of strong tempered spring steel can hold around 30 lbs of weight, so using a few of those will be enough to mount a moderately sized TV on your wall.

You should keep in mind that if you have children or pets who can reach the TV, they could very easily knock it over. Of course, this is a possibility in other solutions as well, but here the danger of such a thing occurring is greater precisely because of the “size” of the brick clamps.

Like in the adhesive tape method, you will need to buy a TV bracket which you will first attach to the TV and then to the clips.

We’re now moving to safer options, the first of which is using rails to mount your TV without drilling holes. If you’ve ever been to an art gallery or museum, you’ve come across this mounting method, although you probably didn’t notice it because your attention was directed to the drawings.

This method is actually primarily used to hang them, but it can also be used to mount TVs. How does it work, you might ask?

First, a long, thin sheet of wood or metal in which rails are embedded is attached or glued to the wall. Then, one or more strings or wires which will hang are attached to rails with hooks. Lastly, the hooks on the other side of the strings are used to fix the TV to the wall.

Like the previous solution, this one is quite elegant and simple but comes with an additional advantage. Since the TV is attached by the strings which sit in the slider/rail, you will be able to change the position and, thus, the viewing angle of your TV if necessary.

However, you also have to take weight into account before making a decision. 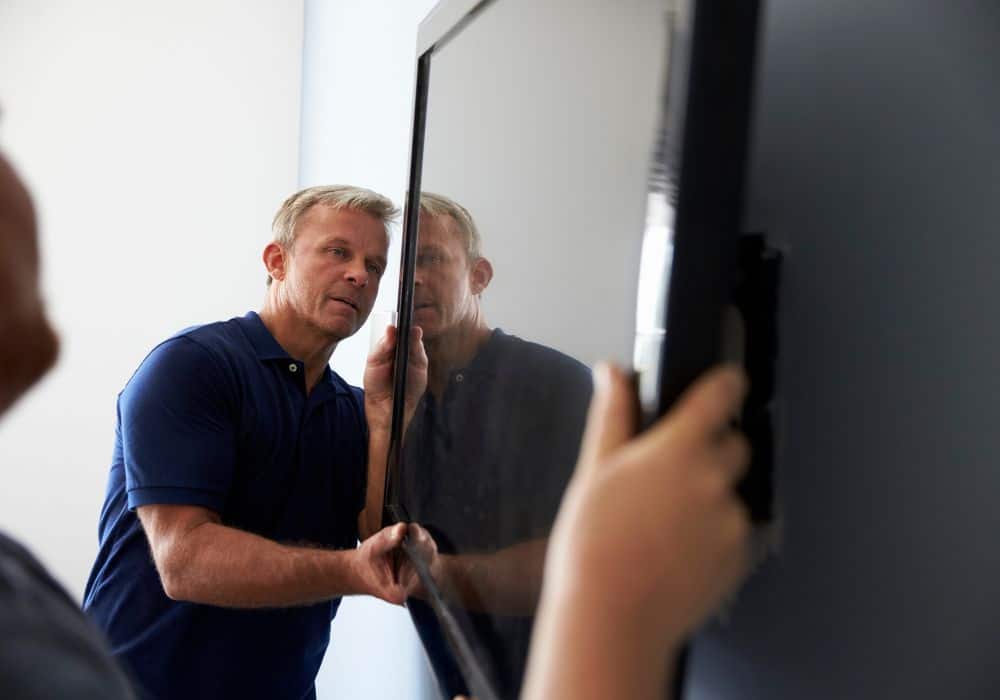 The name of this article is “How to mount your TV without drilling holes”. But in the case of this solution, we will use small nails to attach the TV mount to the wall securely. So still no studs, drywall anchors, or any drilling. We’re keeping our promise! And tiny nail holes are much easier to deal with than large drilling ones, right?

This method is excellent because the hanger or bracket comes with a foam backing that fixes it to the wall. After you put it on the wall, you only hammer nails into the small holes on the upper side of the bracket, which provides an additional layer of protection against a possible TV fall.

The next step is installing the TV bracket, which comes with bolts that are used to attach to the TV. Finally, you will mount the TV on the hanger, thus strongly interlocking the two brackets.

And you know what’s the best about no-stud TV wall mounts? There are products on the market that guarantee that you can hang weights up to 80 lbs and televisions up to 55 inches in size, which probably satisfies the appetites of more than 95% of people who enjoy watching TV.

The next suggestion on our list of methods to mount the TV without drilling holes is the good, old standard TV stand. Of course, if you choose this way, your TV will not be installed on the wall, which may be a problem in rooms that are short on space.

But this is by far the most proven and safest method, thanks to which you will never have to fear the possible fall of the television, for example, when someone accidentally touches it or in the event of a smaller earthquake. You just put the TV on the stand and forget about these possibilities.

Furthermore, the standard TV stand comes with some other advantages that the previous methods didn’t. In the vast majority of cases, they have cabinets and drawers that will not only allow you to hide the television cables elegantly but also to place books, house appliances, clothes, etc. You really can’t go wrong with this one. 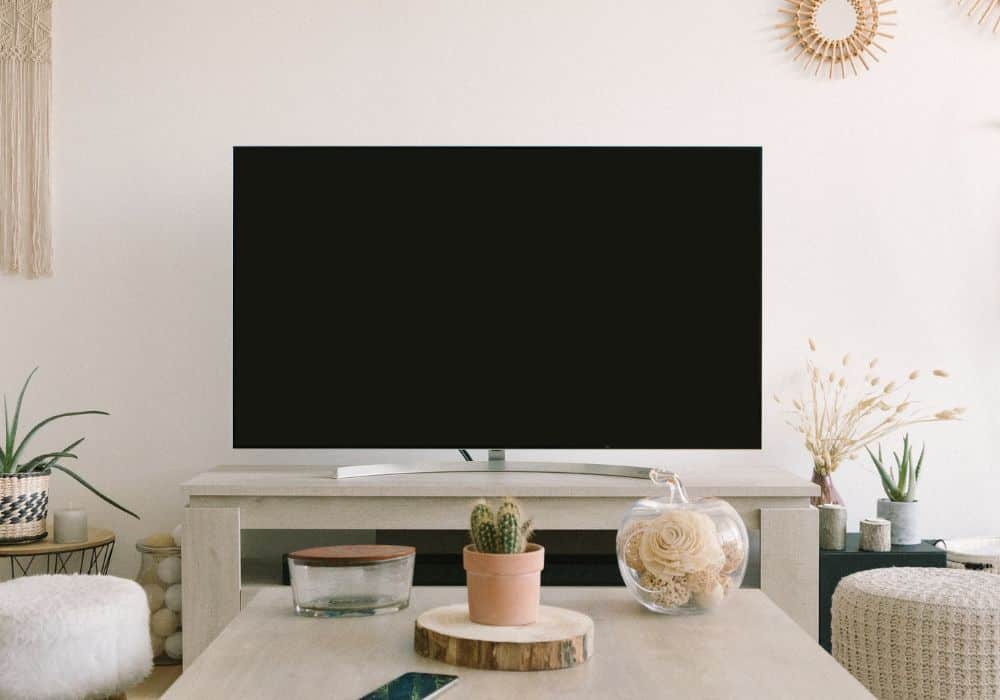 If you didn’t like the previous solution because it might be too old-fashioned, don’t worry because we have something for you too! The hybrid TV stand combines the safety of a standard TV stand with the modern and minimal appearance of previous solutions.

You can easily mount your TV on a hybrid stand characterized by elegance, thinness, and almost complete inconspicuousness, thanks to which you will get the impression that the TV is really mounted on the wall.

What makes them better than standard TV stands is that they are cheap and can be found in all shapes and colors, which will give you the opportunity to play further with the room’s aesthetics.

And not only that, most of these stands come equipped with shelves so you can (discreetly)put away the cables or gaming consoles, for example.

A hybrid TV mount shelf has one advantage over all other methods: it is highly mobile and flexible. Whether it’s cleaning, renovating, or just moving things in the room, this thing won’t cause you any problems.

If you ever wanted to mount a TV without drilling holes, now you know the best ways to do it.

To go super invisible, you can choose methods such as adhesive tape, no-stud TV mount, or brick clamps. All three items are smaller than most televisions, thanks to which it will look as if the TV is glued to the wall (if you use adhesive tape, exactly that will happen).

Another option is rails, which allow you to hang the TV on the wall securely. If you want a combination of modernity and safety, go with the hybrid TV stand. And if you prefer old school, the standard TV stand won’t let anyone down.

If you have additional questions related to one of the methods or maybe you would like to share with us your favorite, don’t forget to visit the comment section.