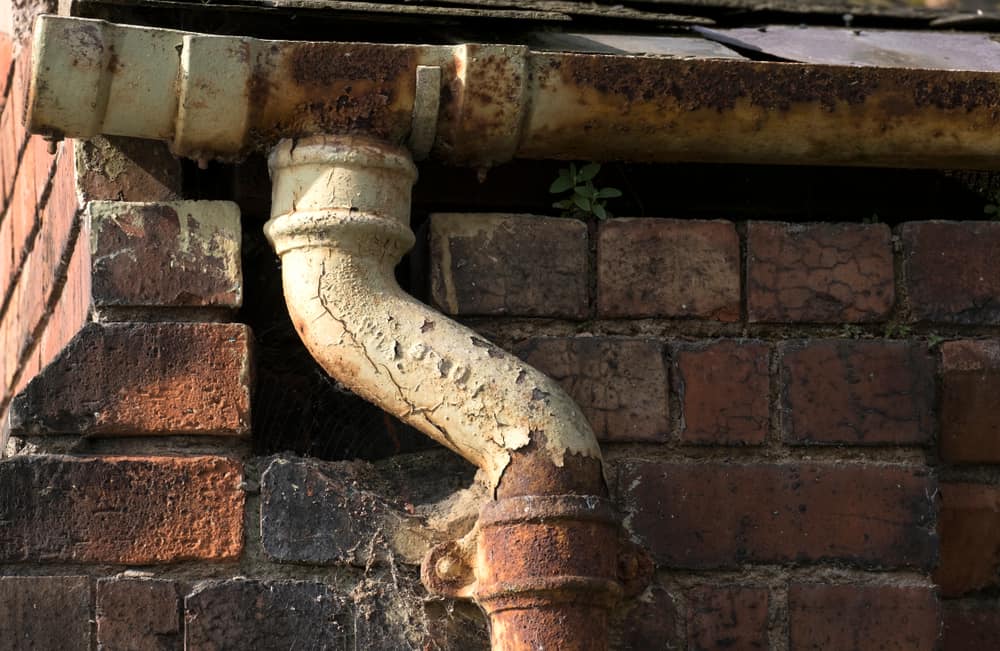 Cast iron pipes were popular during the 1970s and the early 1980s. These are durable, and their ability to resist damage is quite impeccable. But why is it that homeowners with cast iron pipes today aren’t tired of repairing these pipes here and there?

Firstly, these houses are OLD old! No plumbing pipes last forever. Especially in the case of cast iron, the rust that has accumulated over the years will slowly corrode and eat away the metal giving several cracks and leak issues.

That being said, there are ways to repair a cast iron pipe. Now, if the damage is too brutal, you might want to get in touch with a professional without wasting much time. Follow this guide to repair your cast iron pipes in case of minor issues!

What are Signs of Leaking Cast Iron Pipes?

First of all, off sewer odor is one of the major telltale signs of a leaking pipe. Once you figure out the area where the pipes might be leaking, use a flashlight to pinpoint the leak, hole, or cracks. Looking for moistness in the soil surrounding the area might also help you in the hunt.

Moreover, wrapping a paper towel on the potential leaking surface can also help you pinpoint the damage. Check for wet spots at frequent intervals.

How to Repair a Hole or a Crack in Cast Iron Pipe?

In case of small holes or cracks in your cast iron pipe, you can repair them using cast-iron repair compounds quickly and easily. This DIY procedure is perfect for repairing easily accessible damaged cast iron pipes.

While repairing a cast iron pipe might not seem like a risky job, you still need to protect yourself from the foul odor and rust you’ll deal with later on. Wear a mask and a pair of work gloves before getting your hands dirty on this DIY repair project.

Start by removing any chunky rust pieces from the area using a putty knife. Then, smoothen the area using a wire brush. If the rusty layer is too thick, feel free to use a sander for the purpose.

Once the surface is nice and smooth, use a cleaner to get rid of any oily or greasy residue on the surface. Doing so ensures that the cast iron patching compound adheres to the surface well.

Finally, the cast iron surface is ready to be patched and healed. Use a putty knife to fill the hole or crack with the compound. A few best epoxy for cast iron pipe repairs is JB Weld Twin Tube and EP-200 plumbing epoxy putty. Once you apply the compound, let it set.

Step 4. Use a weatherproofing material for larger holes:

Using simply the epoxy on large holes is simply not practical, and the epoxy won’t be able to set. Instead, wrap a layer of weatherproof sticky membrane or waterproof plumbing tape over the damage. Use epoxy adhesive beforehand to make sure the layer is nicely adhered and tight.

Now, use a few clamps, depending upon the size of the hole, to ensure the membrane sets properly. Remember that the clamps should be tightly nutted to prevent leaks.

The damage in cast-iron pipes is often because of years-long rusting. Once you repair the pipe, it would be best to spray a coat or two of waterproof paint to make sure that rust no longer bothers the repaired pipe, at least not for a year or two.

Step 6. Check the area once again:

While attending to major flaws, you might miss a few tiny holes here and there. So, if the cast iron pipe is too old and rust, check the nearby areas for minor damages. Running water might help you with this step.

Joints in old cast iron pipes are often sealed with molten lead and oakum. If you’re experiencing a leak from the pipe joints, follow the below three steps to reseal the joint.

Try to pack the lead back to the hub using a hammer and a chisel. While the lead is still able to reshape itself near the problematic area, sometimes, this method might not simply work.

If that’s the case, remove the lead and oakum remnants from the hub. Take new oakum twice the circumference of the pipe and tamp it into the hub using a caulking tool.

Finally, use a plastic lead or soil pipe sealant to seal the oakum in place. Let the seal set for around 6 hours before you bring the drainpipe back to action.

While lead pipes were used traditionally, it is not the preferable way of sealing cast iron joints these days, given America’s lead-free law. So, if your cast iron lead joints are leaking, you should probably take this as the opportunity to replace them with a cold caulking seal.

Drill the lead and slowly remove it from the hub using a chisel or screwdriver. It might be a daunting task, but while you’re there to get your hands dirty, you might as well install a new seal!

Just as in the case of oakum, start by measuring the circumference of the pipe. Twice this length of cold caulking compound is necessary for the repair. Once cut, spray or brush some water onto the compound.

Remember not to soak the caulking compound completely. Now, tamp the compound onto the hub using a caulking iron and a hammer until all the compound has been evenly packed. Let the caulk dry and set for 6 hours before you allow fluid into the drainpipe.

In most cases, plumbing experts do not recommend band-aid solutions to their clients and suggest they replace the cast iron pipes with PVC instead. Well, they have a point! Below are a few benefits of PVC pipes over cast iron pipes.

As PVC pipes are lightweight, you’ll only need a few plumbers to do the replacement. This means that the replacement process will cost you a lot cheaper. Heavy cast iron replacement requires more human resources and time, thus, making the installation much more expensive.

If your decades-old cast iron pipes are leaking in a few joints or have a few holes and crack here and there, it is a serious sign that the system is not going to last long. You might do some patchwork. But these temporary solutions are only for a few months or a year or two at maximum.

On the other hand, PVS pipes are flexible and have tighter joints. These features assure that you won’t experience cracks, holes, and joint leaks in PVC pipes, at least not for years or even decades.

3. Cost-effective over the long run:

While replacing the pipes, in the beginning, might seem like an unnecessary expenditure, PVC pipes are definitely worth it in the long run.

Firstly, replacing the old cast iron pipes means less maintenance effort and cost. Moreover, your cast iron pipes aren’t meant to last forever. Sooner or later, a replacement is due. So, why not replace the pipes all at once and avoid the plumbing-related hassle once and for all!

You’d have just installed a brand new PVC plumbing system. It goes without saying that you can expect decades of durability from these pipes. PVC pipes, in general, are estimated to last for over 70 years, or even a century and higher if maintained properly.

On the other hand, while cast iron pipes are still impressively durable, these are own to deteriorate relatively quickly due to oxidation and rusting. Also, there will be relatively more maintenance issues in a cast iron plumbing system.

All these four points combined, PVC pipes are definitely leading the race for the best plumbing pipe by miles! If you’re finding yourself getting all worked up regarding the plumbing issues in your house, your plumbing system might be screaming for PVC replacement.

When to Get in Touch with a Professional?

If cast iron pipes underground and under concrete are damaged, you should probably get in touch with a plumbing professional.

Professionals start the diagnosis by using a small camera to analyze where exactly the problem might be. Then, they come up with the best solutions for the damages. If the damage seems beyond repairable, they’ll probably suggest pipe replacement.

If the holes are too big and in multiple processes, they might need to use Cured-In-Place Pipe (CIPP) technology, in which they insert a resin liner in a section of pipe.

Even if the pipe simply requires a patch job, you will most probably not have the necessary supplies to do the DIY in such inaccessible places.

We hope to have answered all of your questions regarding how to repair cast iron pipes. Start by figuring out where the leak is and treat the surface by following this guide. In case of any more queries, feel free to comment below!