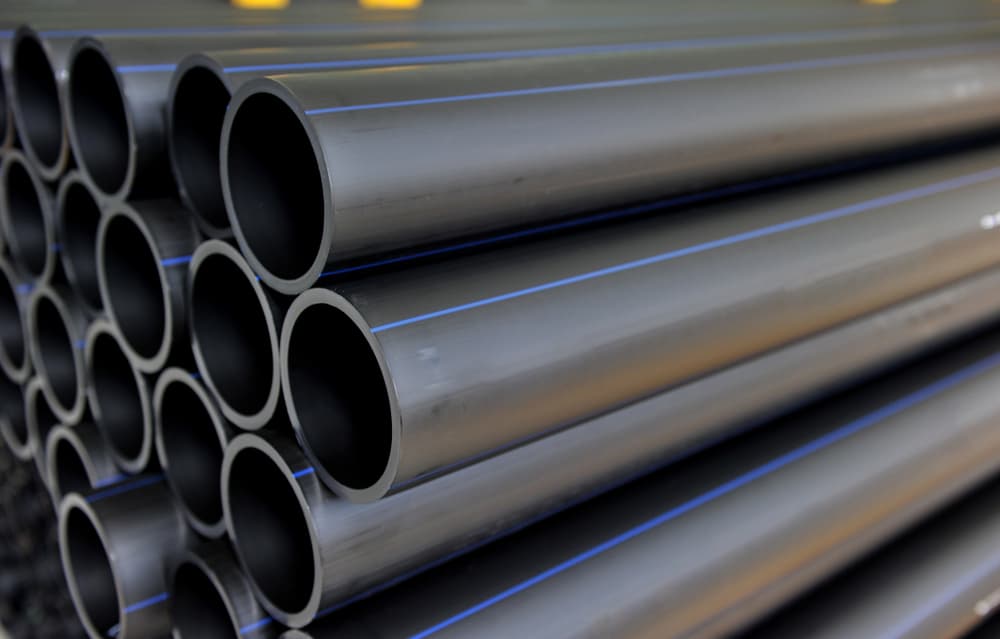 In the world of construction, there are a lot of different materials that seem identical but serve entirely different purposes. Irrigation and plumbing usually require the use of PE pipe or HDPE pipe. These two types of pipes look similar and sound similar, but they are not the same.

Before you assume these terms are interchangeable, check out what we have to say about these pipe materials. They are similar, but you can’t always use these terms the same way. Using the wrong one could harm your piping systems before you even finish your project!

What is PE piping?

PE pipe stands for polyethylene pipe. It’s one of the most common categories of piping used. There are tons of subcategories, including low-density piping, chlorinated piping, and high molecular weight PE piping.

If it was made through the polymerization of ethylene gas, then it is a PE pipe. It is a very common term used by almost every pipe manufacturer out there. Saying you’re using PE pipe is a lot like saying you are using wood in a project. You can be way more specific!

Most people like PE piping because it is resistant to corrosion, durable, and unlikely to crack compared to other pipes. With that said, the specific properties of each pipe can vary because this is an umbrella term. Therein lies the problem that comes with ordering PE piping.

What is HDPE piping?

HDPE stands for “high-density polyethylene” and that means that this is a category of PE piping that is made to be denser and heavier. HDPE is used in a very wide range of different projects, including irrigation, gas mains, standard plumbing, and even electrical conduits.

The big draw here is that HDPE piping is made to be affordable, but can still last for as much as 50 to 100 years. Generally speaking, it can carry cold fluids pretty well and it has a high-stress crack resistance. So, it also works in trenchless applications fairly well.

Now that we know the main differences, let’s take a look at what you should know when choosing your pipes.

The piping industry makes a point of having multiple categories of pipes, including things like PE80, MDPE (that’s “medium-density PE piping”), and yes, HDPE. If you walk into a store and ask for PE pipe, there’s little guarantee that you’ll get the right pipe for your job.

If you have a fair amount of flexibility in the type of piping that you use, then you can generally ask where the PE pipes are in a hardware store and pick from the pipes in the diameters you need.

If you want a pipe for a specific project, you should check out which pipe you should use and find one that’s specific to it. HDPE, for example, can be used in most irrigation pipeline projects—just to name a common choice.

PE piping, in general, can be used in a wide array of different projects. There are tons of different uses ranging from plumbing to electrical work. Even school projects can benefit from PE piping if it involves building a special science project.

HDPE has more specialized uses that run the gamut from gas lines to sewage pipes. A good rule of thumb is that you can use HDPE for any project that involves low to moderate materials flowing through piping.

Because HDPE is noted for being excellent for purposes that involve chemical safety. This is why sewer lines often involve HDPE and why you might see them involved in slurry supply lines. It’s rare to hear of anything causing a chemical reaction with HDPE.

Though HDPE has a lot of different uses that it can do, the truth is that most people tend to associate this with trenchless irrigation systems. If you want to get a good start on a project involving trenchless technology, this is the material for you.

The leakproof quality of HDPE has also made the material a darling among municipal civil engineers. After all, using it wisely can help prevent water main breaks in areas where joiners would be more traditionally used.

PRO TIP – HDPE, while fairly heat-resistant, still can melt under high temperatures. If you are not sure whether you should use HDPE in a project involving exposure to high heat, it’s best to ask the HDPE pipe manufacturer for the pipe’s maximum temperature resistance.

HDPE is one of the more expensive forms of PE piping on the market, specifically because it is so high-density. Other types of PE piping can be fairly affordable when compared to HDPE, including MDPE.

While HDPE is expensive compared to other forms of PE piping, it’s best to keep things in perspective. Plastic piping is always going to be more cost-effective than metal counterparts when used in similar situations.

PE pipes, in general, are very durable. However, HDPE piping takes it to a whole new level. This is a great choice for people who want to avoid breaks due to disturbance or “knocks.” It’s flexible, which means that stepping on it won’t crack it.

PVC pipe cannot be used in the areas that HDPE piping can, simply because it will crack so quickly. HDPE has slow crack growth compared to most other PE pipes as well as other competing materials.

As the name suggests HDPE is denser than many other types of PE piping. That density is great for installations, but it also means it’s heavier than other forms of PE pipes on the market. This doesn’t usually cause a problem for projects.

With that said, it’s still worth noting that HDPE is still a very lightweight material. This is especially true when you compare HDPE to something along the lines of copper or steel. One person’s “heavy” is another person’s “lightweight.”

Generally speaking, PE piping is easy to join and unlikely to leak. While some projects tend to do better with joiners, almost any project involved with PE pipes will involve heat welding to join two pieces together.

Since heat welding turns the two pipes into a larger seamless one, there is little to no chance of leaks. This is true with HDPE piping as well as with other forms of PE piping. This is why these materials are used in areas that cannot have leaks under any circumstances.

With that said, there are some differences between HDPE and other forms of PE piping. HDPE piping does get welded together. However, it is also one of the more heat-resistant forms of piping on the market. So it’s not as prone to melting as other PE types.

Most people rightfully assume that plastic piping of any type is going to deliver a negative impact on the environment. This is true, which is why many people are beginning to grow increasingly leery of using PE piping at all.

Even though plastic is rapidly becoming a taboo subject, PE piping is still going to be popular until engineers can find a more sustainable alternative with low production costs. So while it’s not perfect

Though PE piping is not exactly earth-friendly, there is a unique distinction that is worth mentioning. HDPE pipes are more eco-friendly than other PE pipes. The environmental impact of manufacturing HDPE pipes is noticeably lower than with other forms of PE piping.

HDPE piping’s low impact on the environment is gaining widespread recognition among building material experts. As this study explains, HDPE is “the greenest” plastic piping for water delivery and waste management. It’s a nice distinction to have.

When it comes to building materials, getting the specific name of the material you want to use is vital. This is especially true when you are working on major plumbing, irrigation, electrical, gas, or sewage project. And yes, PE piping can be the handy tool you need for all of that.

Of course, not all PE piping is the same. PE piping is and always will be an umbrella term. If you want some of the most durable materials on the market under the PE umbrella, take a look at HDPE. It’s stronger, greener, and more durable than most other types of PE on the market.

As with any other type of project that you have, materials matter. If you are not sure whether you should use HDPE for a project, ask a materials expert for some sound advice. That small tip could save you a lot of headaches in the future!