Skip to content
Pip's Island » Y-Pipe vs H-Pipe vs X-Pipe: Which is Better? 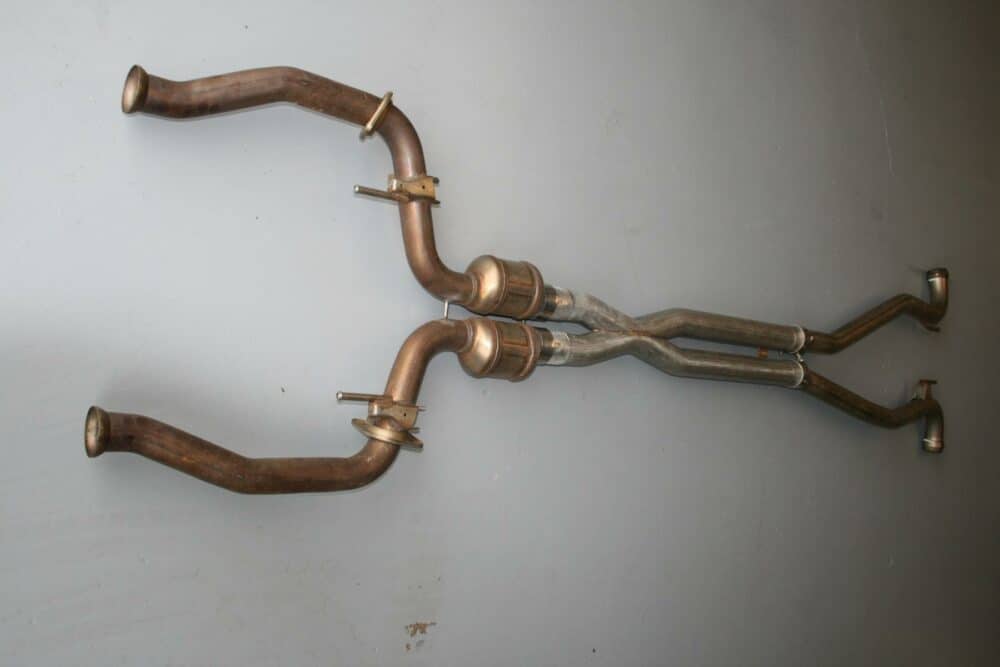 Are you considering customizing your exhaust system for better sound and improved performance? Installing a new mid-pipe might be just what you need.

The mid-pipe is located between the catalytic converter and muffler, with some coming with an inbuilt catalytic convert. This pipe plays an important role in equalizing the flow of exhaust gas from the engine. A more consistent flow leads to better performance.

There are different types of mid-pipes, with the Y, H, and X pipes being the most common. These pipes will improve performance and sound, but each has pros and cons depending on your goals for upgrading your exhaust system.

Read on for a deeper understanding of a Y-pipe vs H-pipe and other common options you can choose.

The Different Types of Mid-Pipes

Most vehicles have a single exhaust. Single exhaust systems are typically found on six-cylinder engines. In single-exhaust systems, the mid-pipe collects exhaust gases from the manifolds. It then sends them through a single pipe to the muffler and out through the back of the car.

In a dual exhaust, there are two pipes connected to the manifolds. Exhaust gases pass through each pipe separately and are transmitted down to the muffler and out through the exhaust tail pipe.

The most common type of exhaust mid-pipes are: X-pipes are the most popular type of mid-pipe for exhaust system customization. As the name suggests, this pipe combines two pipes cross in the middle to form the letter X. For this reason, X-pipes are also referred to as crossover exhaust pipes.

Most performance cars use the X-pipe as it delivers significantly more torque and horsepower than an H or Y pipe. This is because an X pipe allows the exhaust gases coming in waves from the engine cylinders to combine at the crossover point when the two pipes meet. The result is smoother, free-flow of exhaust pressure and lesser back pressure, leading to more horsepower.

X-pipes also deliver superior sound effects. The pipe typically produces a high-pitched tone with some slight raspiness. An X-pipe might be your best choice if you are looking for a loud sound with a bit of pop and immense performance power. 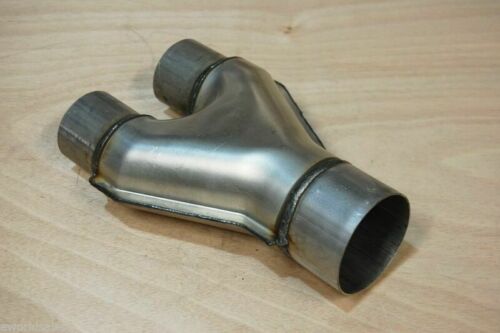 Most vehicles come with the standard Y-pipe. This pipe is common in single exhaust systems. The pipe receives two exhaust gas streams from the manifolds and joins them at the center before directing the gases into a single pipe down to the muffler and out through one exhaust tailpipe.

Y-pipes are usually found on ordinary, non-sports cars. This type of pipe would be too restrictive for a sports-car owner looking for more output and superior performance.

Aftermarket Y-pipes correct this problem by coming in a larger size, thereby increasing the flow of exhaust gases. More flow leads to an increase in performance.

The downside of Y-pipes is that they are restrictive, but this is the most compatible option for a single exhaust system. The upside is that Y-pipes negate the need for a resonator, making the exhaust system lighter and improving the sound quality.

All in all, the Y-pipe does not offer any real performance benefits. It simply serves as an exit for gases from the manifold out through the tailpipe.

Many sports car enthusiasts confuse Y-pipes with straight pipes. Although Y-pipe projects out as a singular pipe at the tail end, it is not the same as a straight pipe. A straight pipe is when you remove the catalytic converters on the exhaust system to remain with a straight pipe from the manifold to the muffler without restrictions.

In most states in the USA, it is illegal to remove the catalytic converter. The converter plays an important role in converting toxic exhaust gases to less harmful gases before releasing them into the atmosphere. So, removing the converters in your exhaust system would bypass emissions laws.

Also keep in mind that straight pipes are significantly loud. By removing the ceramic honeycomb found inside the converter, you increase the sound of the exhaust flow. The loud sound might also be problematic in your area, so look for these issues before installing a straight pipe.

H-pipes are made up of two pipes originating from the manifold, with a smaller pipe connecting two pipes to make an H shape. These pipes deliver low-end torque as opposed to the high-end torque from X-pipes.

The H shape design creates some backpressure, leading to low-end torque. Ideally, it is recommended to reduce back pressure to create more horsepower. But the small amount of H-pipe’s backpressure improves low-end torque and overall performance.

H-pipes do better at evenning out sound, producing a classic yet powerful growl. But, compared to an X-pipe, an H-pipe isn’t as efficient when balancing exhaust gas flow from the manifold down to the muffler. But, the flow in an H-pipe is more consistent and faster than in a Y-pipe.

So, you get a slightly slower flow with an H-pipe than with an X-pipe. You can also expect a deep exhaust sound coupled with a slight but noticeable increase in low-end torque. 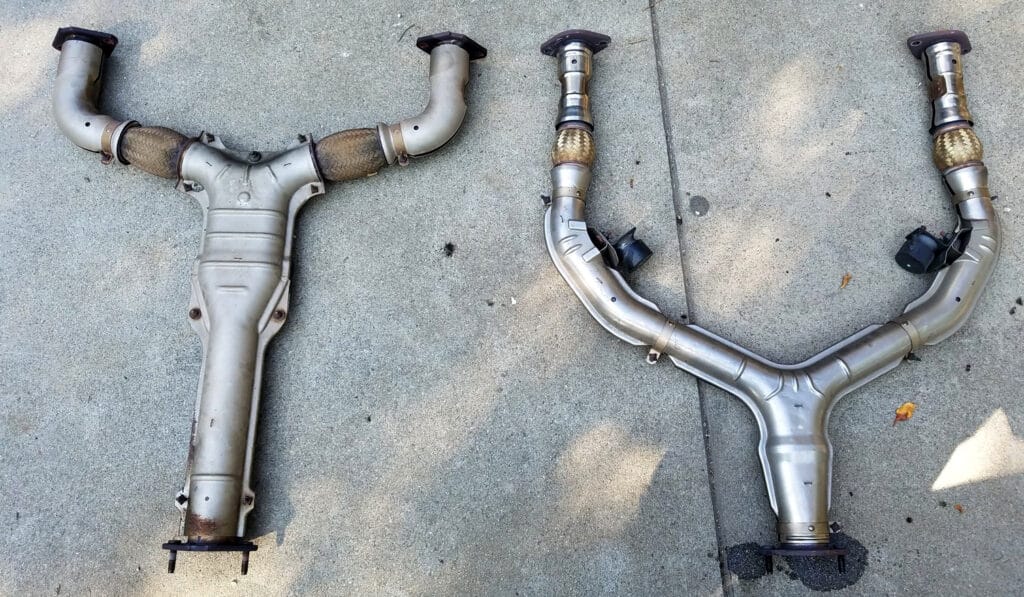 Now that you know what a Y-pipe and H-pipe are let’s look at some of their differences and similarities.

Y-pipes and H-pipes have significant differences and a few areas of overlap, with the first obvious difference being their looks. Y-pipes connect to the exhaust manifold via two pipes, which narrow at the center and blend into a single pipe. The singular pipe then goes to the muffler and the tailpipe at the back of your vehicle.

H-pipes connect to the manifold through two pipes and are connected by a smaller, horizontal pipe in the midsection. But, instead of blending into a singular pipe, an H-pipe appears as two exhaust pipes at the vehicle’s tail end.

Both Y-pipes and H-pipes have two metals connected to the manifold. This is a plus in facilitating the flow of heat and exhaust waves fired from the multiple engine cylinders.

That said, the Y-shape is restrictive in the middle, causing a slow-down in the flow of heat and gases coming through the manifold. Restricted flow means a reduction in performance and torque.

On the other hand, the H-pipe has a less restrictive shape, allowing faster and more consistent heat and gas flow and contributing to greater performance.

Y-pipes don’t offer much in the way of sound effects and are quieter, unlike H-pipes and X-pipes. Exhaust sound effects are one of the many appeals of sports cars. Without the sound and accompanying performance, it really isn’t a sports car! Upgrading to an H-pipe is ideal. H-pipes have an unmistakable muscular growl that will appeal to any sports car enthusiast.

Overall, H-pipes deliver far superior performance compared with the more restrictive stock Y-pipes. Installing an aftermarket Y-pipe with a wider diameter might slightly improve torque. But, an H-pipes is your best bet if you are looking for a massive power boost and increased efficiency of your vehicle’s exhaust. When choosing mid-pipes for improved performance, the choice comes down to X-pipes vs. H-pipes. Both pipes facilitate the free flow of exhaust gases, but there are some slight differences between the two.

X-pipes deliver a greater free flow of exhaust gases. These pipes are the best choice if your goal is more launch speed and performance at the higher RPM band with low-end torque.

The biggest difference between the X and H-pipes is in the sound they each produce. An H-pipe is better if you prefer a classic, more balanced growl. An X-pipe will typically deliver a louder, raspier sound.

Tips For Choosing the Right Mid-Pipe

There are several factors to consider when deciding which mid-pipe to use in your upgrading or customization project.

First, think about how you plan to use the car. The choice of mid-pipe will differ depending on whether you are looking for a slightly modified street car or want a super-fast performance car backed by higher horsepower levels.

An H-pipe is the better choice for boosting low-end torque. You are better off with an X-pipe if you are looking for high-end horsepower at the end of the RPM band.

While performance is important when choosing a mid-pipe, the sound will also influence your choice. Go for an X-pipe if you are after a high-pitched raspier sound or an H-pipe if you prefer the deeper, classic growl.

I hope you are now in a better position to choose the best mid-pipe based on performance, sound, and of course, personal preferences.