Skip to content
Pip's Island » Dump Pipe vs. Down Pipe: What’s the Difference? 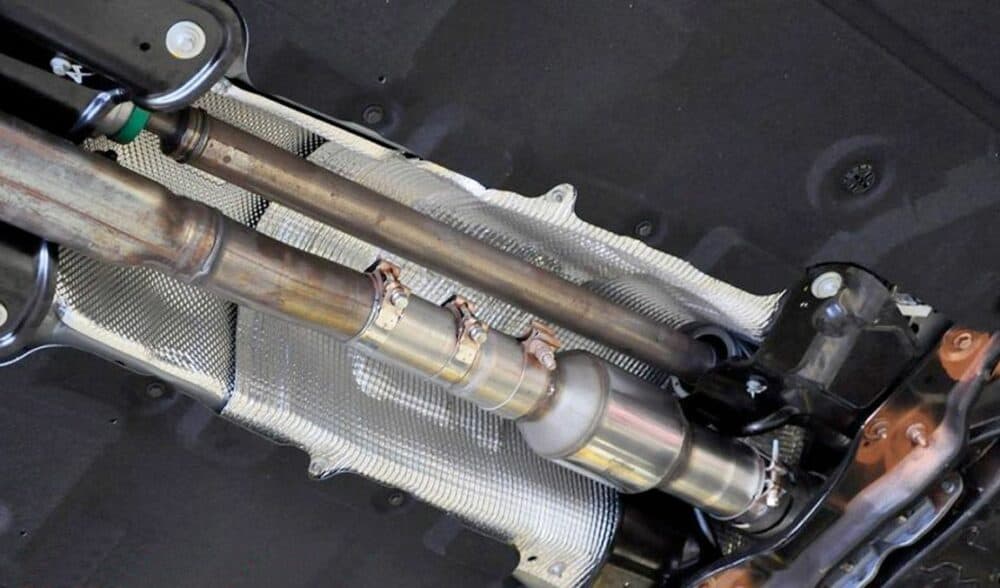 Are you looking to install an automotive turbocharger? Perhaps you are considering some improvements to improve the performance of your car?

Car enthusiasts often install modifications such as a downpipe to increase horsepower and fuel economy.

If you are new to turbochargers and exhaust systems, it helps to learn the difference between critical components such as the dump pipe vs. downpipe.

This article will explore the role of a down and dump pipe in a turbo engine system. If you are considering installing an aftermarket downpipe, we’ll discuss the pros and cons of such a modification to help you make the right decision for your car’s performance.

So, let’s get started!

How Does A Turbocharger Work In a Car?

Automotive engines and exhaust systems are really just a combination of pipes that take in and release air. Before talking about dump vs. down pipes, let’s first understand the fundamental workings of a turbo.

The turbocharger, also known as the turbo, is a part of a car’s engine and exhaust system. The turbo system can significantly boost your car’s horsepower when adjusted and tuned correctly.

Combustion must take place in the engine to generate the horsepower your car needs for ultimate performance.

Combustion, which takes place in the engine’s combustion chamber, requires enough air and fuel. The more the combustion, the more horsepower. This means more air and fuel need to enter the turbocharger.

It is easy to transmit more fuel to the turbo; transmitting more air is challenging, which is where the turbo comes in. The turbo helps to compress air from the surroundings and transfers the air molecules to the combustion chamber, ensuring enough air for combustion.

Combustion helps to boost horsepower, but it also produces toxic exhaust gases. These toxic gases leave the exhaust chamber, causing the turbine to spin and power the turbo. The turbo then takes in air from the atmosphere, compresses, and sends it to the combustion chamber, and the cycle continues creating more combustion and, therefore, more horsepower.

What Is A Downpipe? Now that we’ve covered the basics of how a turbo works let’s find out what a downpipe is and its role in the turbo and exhaust systems.

As mentioned, toxic exhaust gases exit the combustion chamber, flowing through to the turbine to spin and power it. An up-pipe facilitates this process. On the other hand, a downpipe helps the exhaust gasses to exit the turbine housing and flow to the exhaust pipe.

The downpipe plays the important role of moving exhaust gasses as efficiently as possible, ensuring your automotive performs at its peak. Most modern vehicles come with a downpipe with at least one catalytic converter, which helps clean the exhaust gases the system produces.

Catalytic converters have pros and cons, which we will discuss in a bit. But, while they help clean the exhaust gases, they are also restrictive and cause your engine to lose power.

Is a Downpipe the Same as a Dump Pipe? 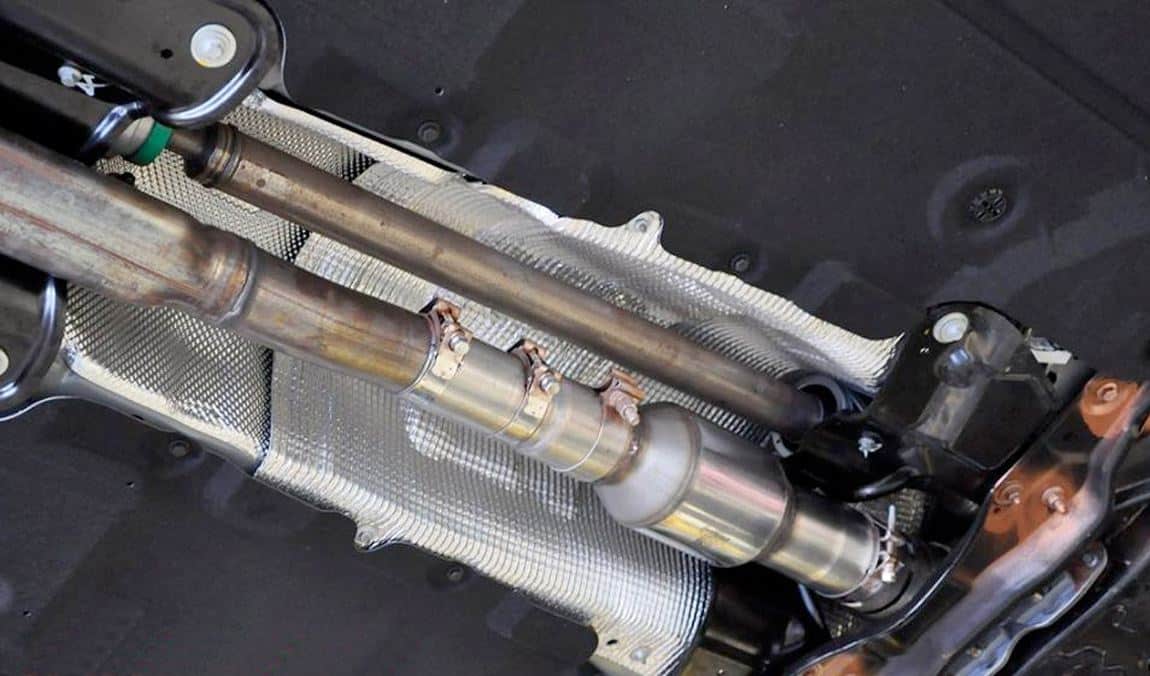 People often interchange the terms ‘downpipe‘ and ‘dump pipe.’ Although they sound the same, these two components are slightly different.

The opening and closing capability of the dump pipe allows an automotive engine to produce more horsepower than if the dump pipe was permanently closed. The reason for the improved performance is the increase in the speed of the exhaust gases leaving the system.

The dump pipe is usually located after the downpipe but before the muffler and catalytic converter. The downpipe is connected to the exhaust manifold on a naturally aspirated gasoline engine. It exits the main engine compartment, connecting to the muffler, resonator, and part of the exhaust system underneath the car.

In a turbo or supercharged forced induction engine, the downpipe is attached to the turbo’s end, which produces hot exhaust gases. The pipe runs through at least one catalytic converter, muffler, or resonator, then into the exhaust pipe and out into the environment.

Should You Buy An Aftermarket Downpipe?

Car enthusiasts always look for ways to boost their automotive’s mechanical power. If you have a turbo or supercharged vehicle, you can significantly increase the horsepower by replacing the standard-issue downpipe with an aftermarket one.

Standard-issue downpipes usually have a smaller diameter than their aftermarket counterparts. The size limitation restricts the flow of exhaust gases, leading to lower performance. Tuning the dump pipe, and replacing the catalytic converter with a high-flowing one, are also small adjustments that can lead to big results.

A downpipe improves the efficiency of your engine’s turbocharger by transmitting exhaust gases away from the turbine, resulting in more horsepower.

One benefit of installing aftermarket downpipes is that they are less restrictive than the standard issues. The aftermarket variety has a wider diameter, allowing exhaust gases to flow easily and the turbo to spin faster.

The increase in turbo spin makes a noticeable difference in your vehicle’s performance. The fast spin creates more spool while reducing turbo lag, engine temperature, and the intake charge resulting in more horsepower. An aftermarket downpipe is worth the investment if you want a faster, more powerful driving experience.

There are two types of aftermarket downpipes. These are Catted and Catless. Let’s take a look at each. So, what is the difference between cat vs. catless downpipes?

As the name suggests, a cat or catted downpipe has a catalytic converter, while a catless downpipe doesn’t have one.

Price is the main difference between catted and catless downpipes, with the catted being significantly costlier. Remember that catalytic converters contain rare metals, which are quite pricey. These metals can increase the cost of a downpipe, but the benefits of a catted downpipe outweigh the costs.

A catted downpipe is ultimately safe for you, your vehicle, and the environment. As mentioned above, the catalytic converter is important in detoxifying harmful exhaust gases before they are emitted into the atmosphere.

Some car enthusiasts wrongly assume that a catless downpipe is less restricted and will therefore increase the vehicle’s horsepower. But, the truth is, this type of downpipe does not provide any significant difference in the flow of exhaust gases, nor does it boost horsepower in a big way.

On the contrary, the absence of a catalytic converter means that your exhaust system will emit harmful gases. If you install a catless downpipe, you will notice a bad odor—these are the harmful gases your vehicle emits, as there is no mechanism to convert toxic gases into non-toxic ones.

It is also important to note that removing or disabling a catalytic converter or installing a catless downpipe is illegal in many parts of the USA. Catless downpipes are not good for the environment, and bypassing emissions laws will set you back a couple thousand dollars. Not worth it. Your best bet is to invest in a catless downpipe.

The downpipe and dump pipe are located close to each other on a car’s exhaust system and play a complementary role.

The main similarity between a dump pipe vs. downpipe is that they both work to ensure the flow of exhaust gases, which power the turbo or supercharger, leading to greater horsepower.