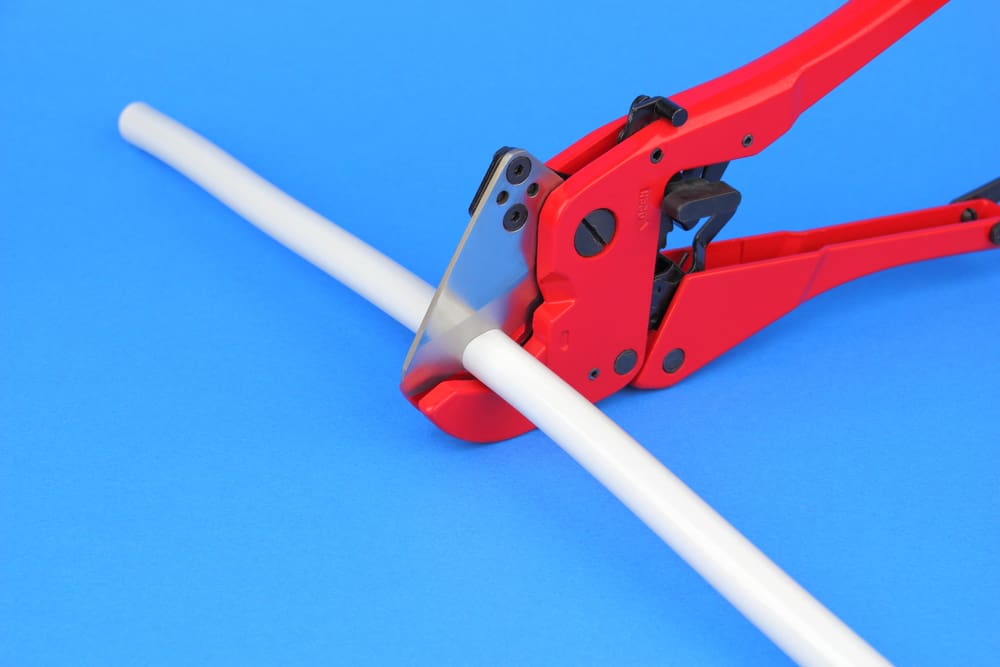 If you’ve ever had to do any plumbing work, you know that there are a lot of different types of pipes that you might have to use. PEX pipe is one of the most popular types of pipes for home use, and it’s relatively easy to work with – but cutting it can be a bit of a challenge.

In this article, we’re going to show you how to cut PEX pipe in a few different ways, so that you can choose the method that works best for you. We’ll also give you some tips on how to make the process easier, and we’ll share some resources that you can use if you need more help.

So whether you’re a homeowner who needs to do a little plumbing work or a professional contractor who works with PEX pipe on a daily basis, read on to learn more about how to cut it.

In order to cut PEX pipe, you’re going to need a few tools. Here’s a list of what you’ll need:

A utility knife or a box cutter will work fine, but most professionals use specialized PEX cutting tools.

You’ll need this to measure the length of the pipe that you need to cut.

This will be used to mark the pipe so that you know where to make your cut.

You’ll require this tool if you’ll want to attach your freshly cut PEX pipe to a wider fitting or valve.

You’ll require this tool if you’ll want to remove crimp rings from your PEX pipes. 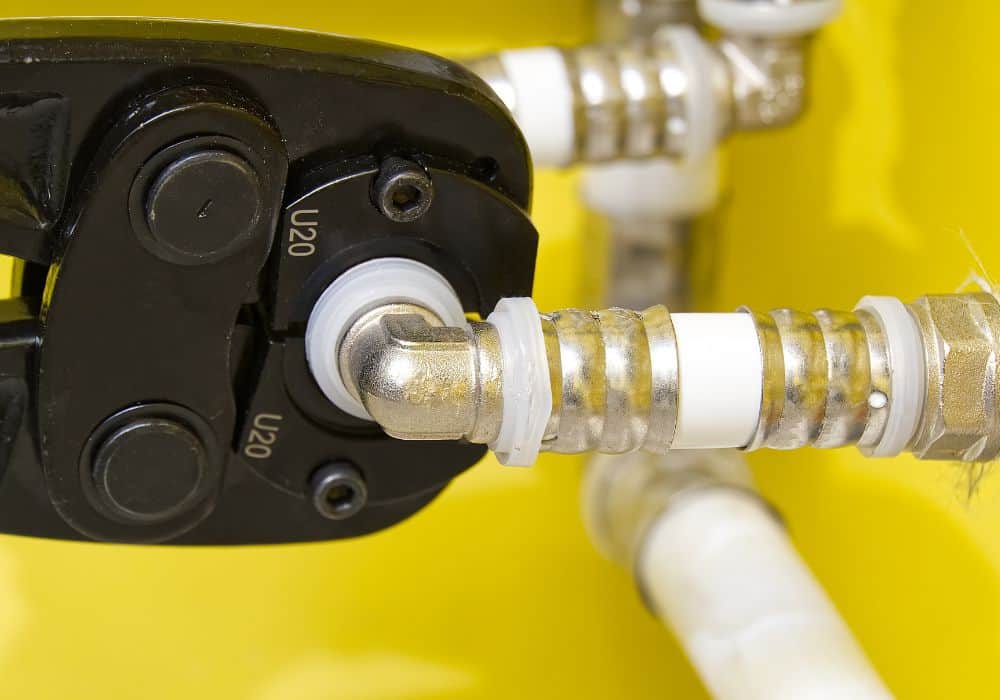 1. Decide Which Tool You’re Going to Use

There are a few different tools that you can use to cut PEX pipes, and each has its own set of pros and cons. Here’s a look at each of the most popular options:

This is a tool that looks a bit like a pair of pliers, and it has a cutting blade that you can use to cut through PEX pipe. It’s fairly easy to use, but it can be pretty expensive.

This is a specialized tool that’s specifically designed for cutting PEX pipe. It can give you a clean, straight cut, but it can require some strength to use properly.

You can buy such a PEX tubing cutter at your local hardware store for as little as $10, but we recommend investing more money to purchase a model with better handles, so it’s easier to use.

If you don’t have the right tool to specifically cut PEX pipes, you can use a sharp knife to make a clean cut through PEX pipe. The downside is that, utility knives or box cutters can be a bit tricky to use for such purposes.

It’s easy to make a mistake and cut the pipe at an angle. However, if you’re in a pinch, they work just fine. A sharp knife will work much better than a hacksaw, which can’t produce clean cuts because of its rigid teeth.

Here’s a video showing how to cut PEX pipe with a utility knife.

Once you’ve decided which tool you’re going to use, it’s time to measure the pipe. You’ll need to know the exact length of pipe that you need to cut so that you can make your cut in the right place.

To measure the pipe, simply use a measuring tape and draw a cutting line using a fine point marker on the spot where you need to make your cut.

Now it’s time to actually make the cut. If you’re using a utility knife or a box cutter, you’ll need to be very careful to make a clean, straight cut. There are a few viable methods, but if your knife is sharp enough, you can start by holding the knife at a 90-degree angle to the pipe.

Then, carefully slice through the pipe along the line that you’ve drawn.

If you’re using a pipe cutter, start by aligning the cutter with the line that you’ve drawn on the pipe. Then, squeeze the handles of the cutter together to cut through the pipe.

If you’re using a rachet-style cutter tool or a scissor-type PEX cutter, start by aligning the cutting blade with the line that you’ve drawn on the pipe. Then, squeeze the handles of the tool together to cut through the pipe.

If you’re using crimp rings to connect your PEX pipe, you may need to remove them at some point. This can be done with a crimp ring removal tool. To remove a crimp ring, set the dial on the tool to match the diameter of the ring that you’re going to cut.

Then, insert the bottom jaw of the tool into the fitting, and make an initial cut at the top of the ring by squeezing the handles. Then, rotate the tool by 180 degrees, so you can cut at the opposite side of the ring.

Squeeze the tool handles again to make the second cut. Now, you can remove the rings

Pro Tip: Most crimp ring removal tools aren’t universal, and can cut only specific types of crimp rings. Make sure you get a tool that matches the diameter and material of your fittings.

Once you’ve cut the pipe, you’ll need to install a PEX tube. This can be done with an expander tool and some fittings. To start, insert the tool into the end of the PEX pipe. Then, expand the pipe until it’s the same size as the fitting.

Finally, insert the pipe into the fitting and hold it in place until it cools and forms a seal. 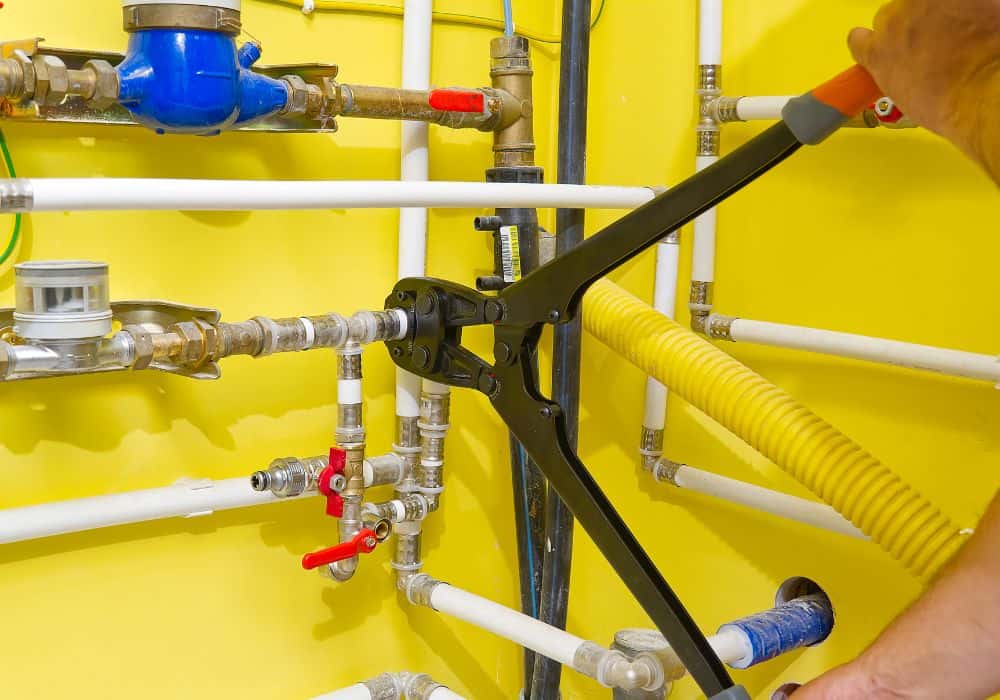 1. Use PEX Crimper To Fix Leaks At Connections

If you notice a leak at your PEX connections, you can use a PEX crimper to fix them. It’s a tool that tightens the crimp rings near the couplers, guaranteeing a water-tight seal.

You’ll have to adjust the tightness of your crimper and then squeeze down on the crimp ring. To see if it’s sufficiently tight, use a special gauge and see if it fits snugly around the crimp ring on your PEX pipe.

2. If You’re Using a Knife, Try Heating the Blade With a Lighter Before You Start Cutting

This will help to soften the plastic, so it’s easier to cut through. As a result, it can make it easier to get a cleaner, smoother cut.

3. Use a Heat Gun To Repair Bent PEX Pipe

If you have a PEX pipe in your system that’s bent, you can use a heat gun to repair it. To do this, simply heat up the pipe with the heat gun until it’s soft, and then allow it to cool off completely. It will fix itself on its own.

Pipe insulation can help to prevent the pipe from UV rays or cold temperatures, which can cause it to crack or break. There are many different types of insulators, from insulator caps to foam sleeves.

5. Store the Pipe in a Cool, Dry Place

If you’re not using the pipe right away, it’s important to store it in a cool, dry place. This will help to prevent the pipe from cracking or breaking.

6. Use Correct PEX Pipes For The Intended Purpose

It’s important to use the right PEX pipes for what you’re planning to use them. For example, if you’re using it for a hot water line, you have to use a PEX pipe that’s rated for hot water use.

Regular PEX pipes can degrade over time when exposed to hot water, which can lead to leaks. Pex Pipes are often color-coded for their intended usage.

7. Use a Pipe That’s Rated for Gas Use if You’re Using a Pex Pipe for a Gas Line

Regular PEX pipes can degrade over time when exposed to the gas, which can lead to leaks. Most of such pipes are multilayered and often include an aluminum layer in the middle.

If you’re looking for a way to cut PEX pipe, there are a few different options that you can choose from. You can use a utility knife or a box cutter, a ratchet cutter, or a scissor-type PEX cutter. Each option has its own set of pros and cons, so you’ll need to decide which one is best for you.

To cut the pipe, you have to follow these steps:

That’s it! if you have any questions, please feel free to leave a comment!