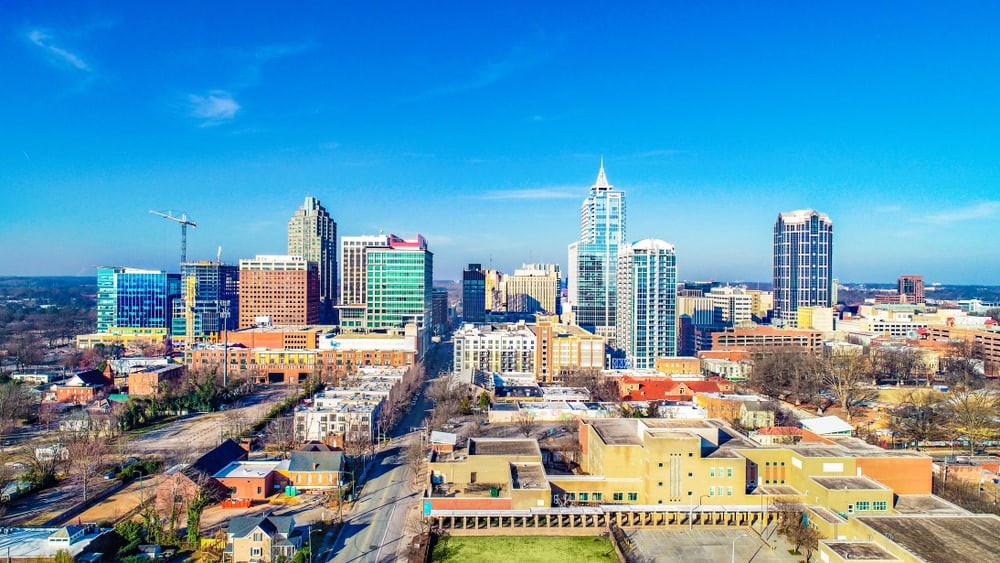 Is it safe to travel to North Carolina? This is a question that many people ask, and the answer is complicated. While some parts of the state are certainly safer than others, there are several cities in North Carolina that are known for being dangerous.

If you’re planning on traveling or moving to North Carolina, it’s important to be aware of the places that pose the most risk. Here is a list of the most dangerous cities in North Carolina based on crime rates and other factors.

The Most Dangerous Cities In North Carolina

According to recent reports, these are the cities where you’re most likely to be a victim of crime. So, if safety is your top priority, you may want to consider another location.

Also, if you’re moving or just traveling, you should know the difference between violent crime and property crime. Violent crime is when someone is harmed or killed, such as murder, rape, robbery, and aggravated assault.

Property crime, on the other hand, is when something is stolen or vandalized, such as burglary, larceny, and motor vehicle theft.

Property crimes are more common, but violent crimes can be much more serious. Knowing what to watch out for can help keep you safe. Here are the 11 most dangerous cities in North Carolina.

Charlotte, North Carolina, has been in the news lately for all the wrong reasons. The murder rate has spiked to 12.08 per 100,000 residents.

In addition, the crime rate, in general, is 42.26 per 1000 people in the population, which is significantly higher than the national average.

However, this city is a popular tourist spot and has parts of it that are safer than others. If you have to move to charlotte, just make sure you research the neighborhoods first to make sure you are moving to the right side of town. 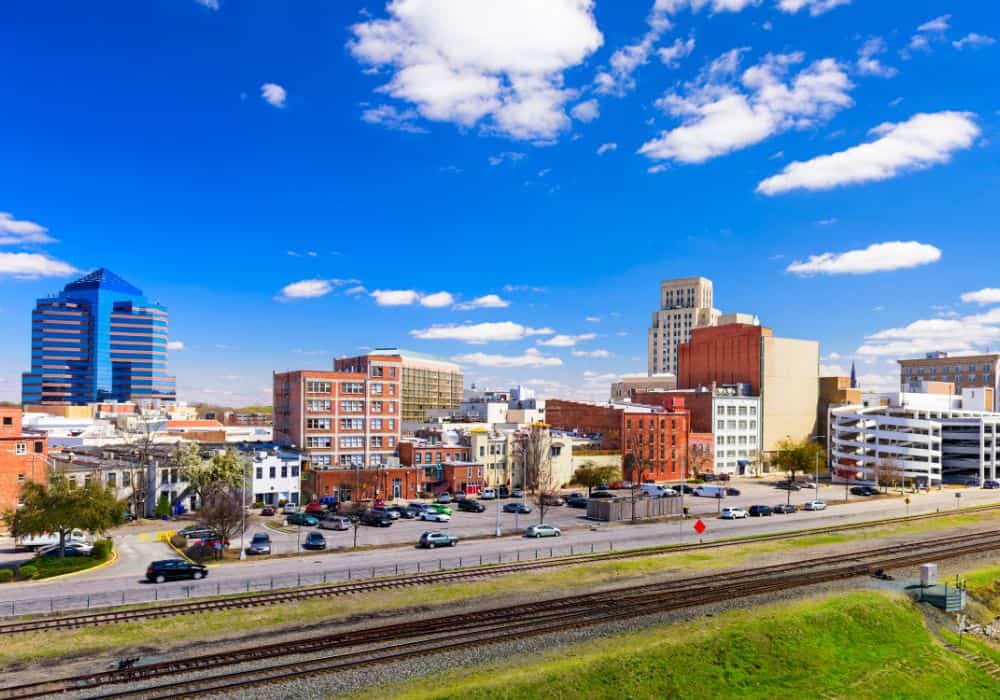 Durham, North Carolina, is one of the most dangerous cities in the United States. In 2015, the city had a murder rate of 21.5 per 100,000 people, which was more than double the national average.

Additionally, the city had a violent crime rate of 47.60 per 1000 people. Unfortunately, these statistics are not unique to Durham, but Durham is definitely one of the worst.

Henderson has been dubbed the murder capital of North Carolina, and with good reason.

With a population of just over 15,000, the city has a staggering rate of 20.12 for violent crimes and 56.77 for property crimes per 1000 people, making it by far the second most dangerous city for violent crimes in North Carolina.

What’s even more alarming is that the murder rate in Henderson is increasing, with no end in sight. Only time will tell if the city can get a handle on this growing problem.

The population of Wadesboro is 5,402 people. Despite its small population, Wadesboro is the 3rd most dangerous city in North Carolina. The crime rate in Wadesboro is an astonishing 97.64 per 1,000 residents.

While violent crimes such as account for some of the high rates, the majority of crimes were property crimes. This is likely due to the city’s high poverty rate; nearly one-third of residents live below the poverty line.

With limited economic opportunities and few resources to prevent crime, it’s no wonder that Wadesboro is one of the most dangerous cities in North Carolina.

Whiteville is another dangerous city in North Carolina. In fact, your odds of becoming a victim of crime in Whiteville are 1 in 6.

The city only has a population of around 5000, and the vast majority of crimes committed in Whiteville are property crimes. 90.22 of the overall crime rate of 107.33 per 1,000 residents comes from property crime.

If you’re thinking of moving to Whitesville or if you already live there, it’s important to be aware of the dangers. Take precautions to protect yourself and your belongings and be sure to stay alert and aware of your surroundings at all times.

Gastonia is one of the most dangerous cities in North Carolina, with a population of around 80,000 people.

The city has a high overall crime rate of 48.49, and there have been several reports of violent crimes in recent years. In addition, Gastonia is located in a rural area, which makes it difficult for residents to access medical care and other essential services.

As a result, many residents live in poverty and are at risk of being victimized by crime. While Gastonia is a beautiful city, it is important for residents to be aware of the dangers that exist.

Rockingham is one of the most dangerous cities in North Carolina, with an average property crime rate of 44.36 per 1,000 residents.

It is slightly safer than other cities but is still high on the list of dangerous cities. Rockingham is also home to a number of gangs and drug dealers, which contributes to the high level of crime in the city.

If you are planning on visiting Rockingham, it is important to be aware of the risks involved and take precautions to protect yourself and your belongings.

Reidsville, North Carolina, has a population of just over 14,000 people and an overall crime rate of 56.71.

The city hasn’t always been considered a dangerous city, but a recent spike in property crime has put Reidsville on the list with a property crime rate of 47.25. However, the violent crime rate remains relatively low compared to other cities with high crime rates.

Albemarle doesn’t rank for the highest crime rate in NC, but it is still pretty high on the list. The crime rate is 65 per 1000, which is significantly higher than the national average.

This means that Albemarle has one of the highest crime rates in America compared to similar cities of its size. While the crime rate is a major concern, it is not the only issue facing Albemarle.

The city also has a high poverty rate and a lack of access to quality education and healthcare. As a result, Albemarle faces significant challenges in terms of public safety, economic development, and quality of life.

Lumberton is by far the most dangerous city in North Carolina. With a crime rate of a whopping 132.40 per 1,000 residents, it is well above the national average.

In addition, Lumberton has a high rate of drug crime. As a result, it is important for residents to be aware of the dangers and take steps to protect themselves.

Now that we have reviewed the most dangerous cities, let’s look at a few of the safest cities to live in North Carolina.

If you are not having to move or visit for work, I will recommend choosing one of these cities for your destination

Elon is consistently ranked as one of the safest cities in North Carolina. In 2018, it was named the second safest city in the state by Safewise, and it has consistently been in the top 10 for several years.

There are a number of factors that contribute to Elon’s low crime rate. First, the city has a strong commitment to public safety.

The police department is well-trained and well-equipped, and they work hard to keep the city safe.

In addition, Elon has a very low poverty rate, which means there are fewer opportunities for crime.

Finally, the city has a tight-knit community that looks out for one another. As a result of all these factors, Elon is an incredibly safe place to live.

Winterville is consistently ranked as one of the safest cities in North Carolina and is a great place to live if you’re looking for a safe community.

If you’re looking for a safe place to raise a family or start a business, you can’t go wrong with Pinehurst, North Carolina.

This small city consistently ranks as one of the safest cities in the state, thanks to its low crime rates and strong job market.

Pinehurst is also home to a number of excellent schools, making it a great choice for families with children. If you’re looking for a peaceful place to call home, Pinehurst is definitely worth considering.

Although North Carolina is widely considered a beautiful and welcoming state, it does have its dangerous areas.

We hope that this article has helped you to be more aware of the most dangerous cities in North Carolina and to take precautions when necessary. Did you find this article helpful? Let us know in the comments.